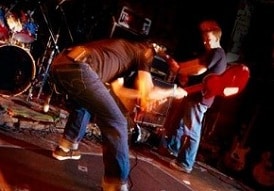 Last weekend, my band and I dropped in the studio to lay down some tracks for three songs. Recording is always a tedious process, and involves so much work from the band as well as the recording engineer. Depending on the degree and seriousness of the project, the process can take anywhere from two days to 2 months, maybe even longer.

Our progressive rock quintet is composed of a drummer, a bassist, two guitarists, and a vocalist. Everyone but our drummer does vocals, so you could say 4 vocalists. We record drums first, then guitars, bass, and finally vocals. When necessary, all five of us get in the room together to throw down gang vocals.

This being the fourth recording session as a band to date, we have a better grasp on how recording goes, and what speed bumps a band is always going to encounter almost every time. Problems happen, no matter how prepared you think you are to detour and prevent them, so you’ve got to be ready. Depending on where you’re going, problems can cost you money and time. This is why if you’re a band going to record for your first time, find somewhere that’s going to cut you a good project rate, like $100 a song or less. You may think you know your songs like the back of your hand, and you just might. To be honest though, the monster I would like to refer to for the rest of this article as the proverbial STUDIO MONSTER doesn’t give a shit. He (assuming it’s a dude) is going to make you feel like a complete amateur, like the first day you picked up a guitar.

Recording to a click is the first and foremost problem I feel that most will have. If the drummer goes in and throws down his stuff first, the rest of the band doesn’t necessarily have to listen to the click. If you’re a drummer and you have a hard time playing to a metronome though, you should probably think twice about going into the studio so fast. You’re going to find that a song that should take one to two hours can turn into a half day’s time lost, learning to play to a click track instead of actually recording and getting work done. On the other hand, if you’re going to do it without a click, then all you need to do is be a solid drummer that can keep a pretty steady tempo without fluctuating pace too much to be noticeable.

If you’re crazy like my band, we naturally love tempo changes. Sure, we would love to be like your standard radio rock band and create the same tempo songs all the way through, but…wait, no we don’t! It’s not like we make it a discipline to create complicated tempo changing songs, but that’s just how it happens sometimes. Having your tempos figured out is always a good thing to do before you hit the studio, but sometimes you really have to have drummer and the songwriter play parts to a click track and really narrow in on what tempo is the right one.

Once you’ve recorded all your parts, the fun begins for the engineer, who then needs to adjust the levels of all the tracks to blend well together to make what we call a mix. He’ll also add some reverb to the vocals, and other effects to make the mix sound the best it possibly can. The mix needs to be full, thick, and most of all, loud. Producers and engineers have many tricks of the trade to do these things, and while sometimes great, sometimes these tricks can be not so great. The overuse of drum triggers is a fine example of this overuse of studio tools. Drum triggers allow the producer to replace every sound made by the drums with pre-recorded drum sounds that are supposed to sound better than real drums. I don’t really agree with this practice…some drum triggers are cool, but I really prefer the sound of real, live drums. The modern music industry has pretty much told our ears that perfect triggered fake drums are what sounds the best, so that’s what sells.

If and when you get the chance to hit the studio, just be organized. Having everything you want to do laid out prior to entering is key to creating a successful demo. Even if you do all these things, be ready to have the STUDIO MONSTER wreak havoc upon you because he will. He’ll stop at nothing to tear apart you, your band, and whoever happens to be pressing the buttons. He’s relentless, but if you put in 110%, you’re going to defeat him. I promise.