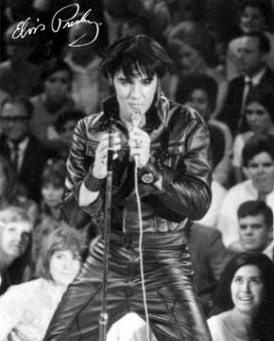 On June 5, 1956, signing “Hound Dog” on national primetime TV, Elvis Presley served the white man his notice. In a burlesque performance full of hip-swiveling gyrations and erotically charged yelps, Elvis turned a nation of middle-class teenagers onto the libidinous power of black rock and roll. He also shook the status quo to its foundations. “An aborigine’s mating dance,” wrote one reviewer. Another critic—a duly elected congressman—was less indirect: “Rock and roll has its place,” he offered, “among the colored people.”

What is obvious in retrospect is not that Elvis was the greatest rock singer of his time—that would be Little Richard—nor even its most brilliantly innovative artist—that would be Chuck Berry. Where rock and roll was concerned, Elvis Presley’s true gift was being white.

As quickly as he arrived, he was gone. By the end of the Fifties, the dangerous Elvis gave way to sanitized Elvis, fueled by the easy success of mainstream acceptance. As rock music advanced into bolder territory, Presley stayed on familiar ground, showing occasional flashes of brilliance during his late-Sixties Memphis period before settling into the zombie kitsch of his Las Vegas years.

On August 16, 1977, he was gone for good. Overweight, and punished by years of drug abuse, Presley died on the bathroom floor at his Graceland mansion in Memphis, just 42 years old. His remains are interred on the mansion’s grounds.

Even as Elvis died, the rock music he helped create was experiencing it last moment of consequential fury in the punk music rising out of England. Within two years, black musicians in New York would begin brewing up rap, an insurgent music more potent than anything white rock could muster. Today, Presley’s legacy is kept alive in the confrontational rock-rap hybrid of groups like Beastie Boys, Korn and Limp Bizkit. In crossing the great racial divide, they got white American culture all shook up, much as Elvis did one hot summer night in 1956.