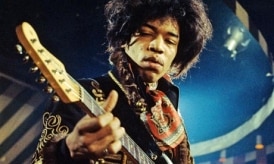 Jimi Hendrix was given the top spot — According to the readers of Time Magazine, Jimi Hendrix was voted the greatest electric guitar player of all time, and honestly, I can’t say that I disagree. He’s influenced so many great guitarists in his short time here in this world, that I’m not sure anyone could disagree…

But you are more than welcome to in the comment box below!

Jimi Hendrix was given the top spot on the strength of his unique fusion of genres such as rock, blues and psychedelia.

“No-one wielded a guitar with as much charisma,” Mr Tyrangiel commented.

Hendrix, who died from a drug overdose in 1970, was followed in the list by former Guns N’ Roses guitarist Slash, who was described as a “remarkably precise player”. While, blues guitarist, B.B. King took the #3 spot.

Rolling Stones guitarist Keith Richards was also included in the top ten, mainly because he has written more memorable electric guitar riffs “than anyone else in rock ‘n’ roll“. Mr Tyrangiel highlighted the hook to (I Can’t Get No) Satisfaction as a good example of this, along with the riffs to, Gimme Shelter, Jumpin’ Jack Flash and Start Me Up.

You have to love the way Hendrix plays his right-handed guitar upside-down so fluidly. He didn’t started playing like when he first started learning how to play guitar, yet today we look at that as one of his signature, and unique, trademarks.

If you’re not crazy about Time Magazine’s Top 10, then check out Gear-Vault’s Top 20. And if you like to fight, check out the Fight Club: Jimi Hendrix vs. Stevie Ray Vaughn — my vote goes to Hendrix winning that fight!

Only in the world of “Charlie and The Chocolate Factory” would the guitar-world have such craziness and drama, right? Wrong! We are all too familiar with the recent debacle the past few days–the ongoing internet […]