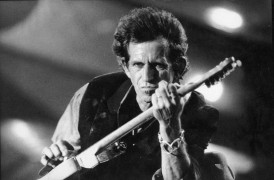 Rolling Stones are one of the greatest rock bands of all time, so of course everyone should be familiar with this band. You have heard their music, you watched their biography on VH1, and you probably even see people wearing a Rolling Stones logoed t-shirts every day. It is safe to say that this band has made themselves into something bigger than life.

Of course everyone is familiar with the superstar lead singer, Mick Jagger, but I feel like sometimes the front man of bands like these greats almost get too much credit while the rest of the band stays hidden someplace off in the shadows. Sure they reap the same benefits as the front man such as money and luxuries on tour but as far as popularity, they may not be as easily recognized as the rest of the band. This is not just a general observation; this is all being said about a very specific, much underrated guitarist that I believe deserves a little more recognition than what he is currently receiving. I am referring of course to, musical genius, Keith Richards, guitarist of The Rolling Stones.

Keith Richards was born December 18th, 1943. The guitarist has always been incredibly interested in music and is largely known for his innovative rhythm guitar playing. Although rhythm guitarists aren’t generally all about solos and technical things of that nature, Richards managed to snag the number 10 spot in Rolling Stones Magazine 100 best guitar players of all time. Who said lead guitar players are what make the band?

As a child, Richard’s grandfather had been in a touring jazz band which is what got him so interested in playing guitar. His mother, however, was the first one to actually purchase him a guitar of his own; making a huge stride toward the man he came to be. Though he had some encouraging elements in the family, he also had some which were discouraging, namely his father. While the rest of his family supported him in his musical interests; his father found it to be annoying and would always yell at his Richards to quiet down.

Despite certain unsupported aspects of his early musical career I would have to say that he made himself into quite the successful performing artist. I hope by writing this article people begin to take a deeper look into, not just The Rolling Stones, but every band and see more than just the front man. I hope the readers see all of the talent in the bands that ultimately makes their music what it is; accomplished.

Did The Rolling Stones announce retirement? On July 24th 2010, Thesun.co.uk wrote “Stones to stop Rolling“. However, Gossipcop.com are refuting those claims and wrote “The Stones To Keep On Rolling“. So is there really a “Farewell Tour“? We’ll keep you updated.

Kiss is one of those definitive rock and roll bands—y’know, the ones both critics and parents loathe, but the kids love anyway. When looking back over the history of rock, however, one can surely ask […]

updated from September 21 2009 — RIP B.B. King. You will be missed There are moments in every B.B. King solo when the man hits a certain combination of notes, or bends the string in […]

Guitar Player or Guitar Collector – Which Are You?

Guitarists, as most of us already know, are perhaps the most intense and obsessive of all musicians about their instrument and their relationship to it. This obsession normally manifests itself in one of two ways […]