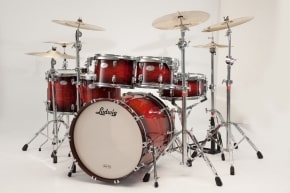 Instead of cutting new timber, Ludwig locates felled logs from Australia and Africa, three exotic hardwoods made the final cut because of their tonal quality and visual elegance: Lacewood, Sumauma, and Black Limba.

Ludwig has combined these exotic woods with inner and outer plys of North American maple and traditional single 1/8-inch thick poplar core ply that creates a rich sonic warmth to the Legacy’s shell and moves it into an all-new array of tonal range. Legacy’s trademark rounded bearing edge creates a perfect compliment to the ¼-inch single-ply maple reinforcement rings. Four finishes in each of these woods will be introduced throughout 2009. The Ludwig Legacy Exotic kits will only be in limited quantity, making this beautiful craftsmanship another perfect addition to Ludwig’s outstanding vintage tradition.

“Ludwig drums have been the industry standard since 1909 and the tradition and quality continues on today better than ever with a sound that could only be Ludwig“, said Kevin Packard, Director of Marketing, Combo Percussion. Visit Ludwig’s official web site for more information.

If you are looking for a quality acoustic-electric that won’t destroy your budget, look no further than the latest offering from Seagull Guitars. A couple of years ago, Seagull began to improve and supplement their […]

Press Release–Since 1909, Ludwig has been making exceptionally crafted percussion products for drummers of all styles. During the 100th Anniversary year, Ludwig is proud to announce the release of the Ludwig Anniversary Edition Stainless Steel […]