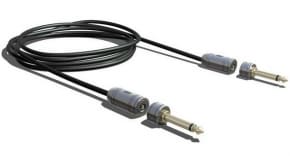 In today’s guitar world, with so many instrument cables on the market, it is hard to justify another offering unless it’s something extraordinary. The SnapJack, a cable that detaches in the event of excessive stress, certainly falls into the “extraordinary” category.

The sample that I received from Dot On Shaftto review was a dual straight end cord, with a separate package of two angled ends. The jacks attach magnetically to the cord, leading to my first – and obvious – question, “How hard will I need to pull to break the connection?” Couple of my compadraes` tried to pull the plug ends off in a straight-line direction, to no avail. But once we tried breaking the connection at an angle, the mystery was out. The magic trick was accomplished through the use of super-tough neodymium magnets and a slight magnetic polarity voodoo, keeping the jack-ends firmly in place unless pulled at an angle.

It’s highly unlikely that players will find this cable to be tonally inferior to other cables – it stood up to testing against a George L and a Monster Cable with excellent results. The high frequencies were sparkly and clear and the lows were flawlessly tight. As another feature, when the SnapJack’s connection is broken, it does not generate the loud, speaker destroying hum or pop like the standard cord. This opened up an array of possibilities; by placing the additional ends in several of my guitars, I was able to change guitars rapidly and quietly without shutting off the amp. This is also a great way to protect your guitars and amps from those roadies who have clumsy feet.

I did find one complaint about a SnapJack accidentally disconnecting while on stage, but since he was previously doing a jack repair on his guitar about every month, and since he hasn’t done one since the SnapJack’s introduction, we’ll consider it a win (SnapJack has recently introduced a new locking system to prevent snapping during live performances).

The End line
This cord is an absolute-must-have for musicians who want to switch between instruments/amps quickly and quietly, or who are always tripping on cables.