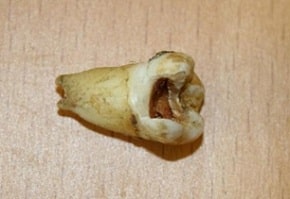 We’ve all seen some bizarre items owned by celebrities that have been sold at auction. Britney Spears’ napkin, Justin Timberlake’s breakfast scraps….the list goes on, and gets weirder.

But this one surely takes the cake for celebrity obsession (and intrusion).

A certain tooth, (that’s right, a tooth) was sold at auction on Saturday, formerly belonging to none other than ex-beatle John Lennon.

The tooth, which originally went up for sale at $16,000, was owned by Lennon’s housekeeper, Dot Jarlett. Dot stated that John lost the molar, then instructed her to dispose of it. Lennon changed his mind and let her have it later, learning that her daughter was a major fan of The Beatles.

Now, more than 4 decades later, the tooth has sold for $31,200 to a Canadian dentist. The tooth is so old and degraded, that DNA tests cannot be performed on it.

Dot Jarlett has sold a number of Lennon’s items in the past, including a jacket, and a hat. (You can see the jacket on the sleeve of the Rubber Soul album.