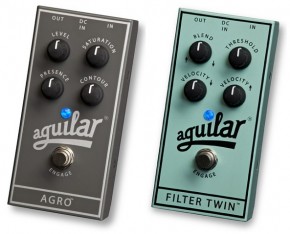 The answer to “Why design pedals specifically for bass?” is a little more nuanced than some might think. Guitar effects often include a “free” low-cut filter that starts rolling off around 90Hz, on the assumption that guitar strings don’t go that low but hum does, so why not reduce the hum?
While that’s fine for guitar, the effect becomes unsuitable for bass, as the instrument’s natural fundamental frequencies can’t make it through.

And because bass is an octave lower, filters that are “tuned” for guitar need to be tuned lower for bass, or you lose the bottom.
Similarity, while some grit on bass can sound good, generating too many harmonics makes the bass overly bright, and again, you lose that all-important low end.

Aguilar designed the AGRO and Filter Twin pedals specifically for bass. Both use 9V batteries, with provisions for DC adapters. The AGRO doesn’t draw much current (I measured under 6mA), but you may want an adapter for the Filter Twin, which draws about 11mA—still reasonably low though. The batteries mount on the slide-out trays, making them extremely easy to replace. Units turn on by plugging a standard mono guitar/bass cable into the input jack.

Both units feature steel construction, and the four knobs are held on to the front panel with washers and hex nuts, which greatly increases reliability. The footswitches are push-on/push-off types with a positive “click” and blue LED that indicates the effect is engaged. While not promoted as true bypass switches, I took the units apart and saw the familiar six footswitch pins that indicate a DPDT footswitch. True bypass was confirmed by removing the battery, and the signal was still being passed in the bypass position. 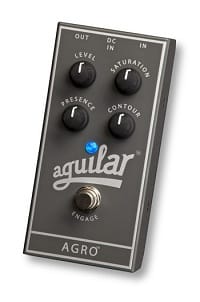 Full disclosure: I like distortion on bass, so I was favorably disposed toward the concept even before plugging in. But this cuts both ways—I have definite ideas about what I want and am easily disappointed if those expectations aren’t met. In a nutshell, I want “growl,” not “buzz,” and the ability to shape the frequency response so that the bass fits in well with a live performance situation or recording—I don’t always want it to dominate, but I seldom want it to sit politely in the background either.

AGRO, based on the AG 500 bass head’s saturation channel, does what I want. Saturation increases the amount of distortion, Presence adds or rolls off the upper mids (4kHz, where pick noise and distortion harmonics live) so that the bass can “cut” more or less, while Contour does a broad scoop 900Hz—counterclockwise cuts about 20db, while clockwise is flat. Scooping gives a little more “meat” to the bass by putting the focus on the low end. Level sets the output level, and whether by accident or design, it does something very cool: It works as expected up to about 2/3 of the way, after which you can get a decent boost if you want to overdrive an amp input. Thumbs up on that one!

I quickly dialed in a favorite “grit” setting—Presence and Contour at 9:00, and Saturation at 12:00. For a more aggressive sound, Saturation at 3:00. Presence at 12:00, and Contour full up did the job. There’s sufficient latitude in these controls that I started wishing for the ability to save presets. 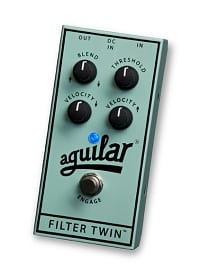 This is an envelope follower-based wah, but has two filter sections. One acts like the usual envelope follower, where you hit the string, and the filter decays from high to low. The other attacks from low to high when you pluck, then settles back down to low again—think “wah” instead of “oww.”

There are four controls. Blend sets the mix of the two filters, while Threshold determines the envelope response. Each filter has its own Velocity control, which is basically the amount of filter sweep. A good starting point is all controls at 12:00, which gives more subtle, “vocal”-flavored filter effects. Increasing the Velocity controls to full up gives a more exaggerated filter sweep, but at all settings, it’s impossible to kill the low end. This is not wah as in “Theme from Shaft,” but a more bass-friendly, not-so-resonant filter that can sound very warm and organic. With subtler settings, you could leave this on all night just to add “animation” to the bass sound.

These are solid performers that are sensitive to what bassist needs—effects that don’t diminish the low end. The two pedals have very different characters, but can also make a good pair; if you check them out together, try Filter Twin before AGRO to hear a whole other kind of distortion.

These were obviously designed by people who know bass. The build quality and functionality are spot on, but more importantly, they let you take your bass sound “out of the box” without sounding forced or gimmicky.

Ask people who have owned 24-track, two-inch recording studios what they think of ADATs, and they’re likely to become extremely perturbed. Not because they’re offended by the notion that digital technology could ever sound as […]

An interesting debate was brought before our attention and felt we should pass it along to you good folks. How does the Gibson Les Paul compare to the Epiphone Les Paul when Epiphone is owned […]