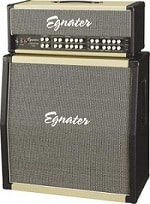 For three decades Bruce Egnater has been building and designing amplifiers which have inspired many modern amplifier builders with their balance and serious high-gain tones, and to this day remains a major point of reference for boutique amp builders looking for that killer distortion. Of Egnater’s talents, his design of multi-channel amps is prominent, which is solidified with his contribution to the design of Rocktron’s TOL amplifier series as well as the Modular Tube System (MTS) amps from Randall.

One of Egnater’s more notable amps, the Tourmaster, is a work of art that is packed with a variety of sounds, gain levels, and features – all packed in a 75-pound monster. The Tourmaster features four preamp channels, voicing options and a contour circuit to give you a wide range of tones, suitable for just about any player. However, Egnater also includes their Power Grid control, which allows you to adjust the wattage of the amplifier, which takes versatility to a whole new level. The Tourmaster gives you the ability to switch between 10, 20, 25, 50, or 100 watts of power on any of the four channels. To top it off, the Tourmaster is a tube-driven amp, using four 5881s and a whopping eight 12AX7 tubes (all from Groove Tubes).

The Tourmaster’s assortment of cool features are not just numerous, you can actually use them, as well! The Tourmaster features both low and high gain inputs as well as four different preamp channels (Clean/Vintage 1 and 2, Overdrive 1 and 2). Each individual channel also features identical sets of volume, treble, middle, bass, and gain controls in addition to a voicing switch (for setting the channel to classic or modern voicing). The switchable voicing tool (the ‘contour’ circuit) allows you to change the midrange curve from wide and scooped to a more focused, forward tone. The amp also has a global volume control, reverb, density and presence controls. Also, the Tourmaster comes with a six-button footswitch, allowing you to remotely control all four channels, the effects loop, and reverb.

The amp’s back panel is also packed full of features, such as a speaker-simulated recording output (with dedicated level control), tube-biasing test point, dual speaker outs (with settings for 4-, 8-, and 16-ohms), and tube-driven series/parallel effects loop (which is channel-assignable and switchable) with send/return level controls.

Using the Power Grid on the rear panel of the Tourmaster, you can assign different power options to each channel (thanks to a custom-designed transformer) using slider switches from 100, 50, or 20 watts (with a ‘half-power’ switch to cut them to 50, 25, and 10 watts respectively).

The Tourmaster was tested through a Tourmaster 4×12 cabinet loaded with Celestion Vintage 30 speakers. One great feature about the cabinet is that the jack will detect impedance automatically, taking the guesswork out of connecting safely to a variety of amps.

It is very easy to make great tones with the Tourmaster, thanks to Egnater’s custom compression, which is able to focus the amp’s tone at high volumes without limiting the dynamics as it enhances the strength of the tone. The amp’s voicing is open and airy when set to classic, and the modern setting increases the amps punch and response. The Tourmaster’s Clean/Vintage 1 channel has no trouble replicating the spongy, dark tones of the Blackface era and can even match a late-sixties Deluxe when set to a lower power setting. On the Clean/Vintage 2 setting, the amp delivers more gain and bright tones, which are great for more bluesy solos and dirtying up clean rhythm sounds.

Egnater’s Overdrive 1 channel presents a round, more granulated, and detailed distortion, unlike most British overdrive channels, which tend to be more sharp and jagged, and it generates plenty of distortion for those classic rock and metal sounds. Overdrive 2 brings out the big guns, using every bit of the Tourmaster’s ability to generate gain while still giving every note the all-important punch. The amp’s reverb is also not overwhelming of the overdriven tones.

The Tourmaster 4100 is yet another star in the multi-faceted and versatile lineup of Bruce Egnater’s amplifiers. You will love the five Power Grid options for each individual channel, as well as the Tourmaster’s unique way of controlling response. To top it all off, the Egnater Tourmaster will deliver regardless of which style of music you throw at it at about half of the price of similar amplifiers. Musician’s Friend: New Products

Leo Fender and Marshall Amplifiers – Beginning of the Guitar Amp

Continued on from “Gibson Firebird Guitar Born 1963” Of course the electric guitar wouldn’t have developed at all had it not been for amps. And the guitar amplifier would never have come into being had […]