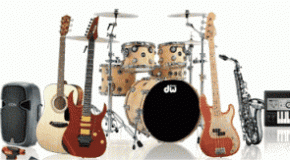 Every musician knows that you can find great deals on music gear by hopping on the internet and doing their shopping via a website. Now, that may not hold the same charm as physically picking up a guitar or bass, plugging in and annoying the owners of the little dress shop next door, but for those who know what gear they want shopping online can be a great way to save time and even money (which can be tight for the budding artist).

One concern that could be had is which sites are the best for finding good deals on musical gear while giving the customer a variety of stuff to fill their pedalboard with. We’ve taken a look at five of the major music gear sites on the web and we have compiled our findings into one nifty little article just for you! With that, let’s have a look at what we’ve found.

Upon first look, this site appears to be just another music gear site that looks like any other ecommerce site on the net. However, the first thing that grabbed my attention was an image link that said ‘Offbeat’. Naturally, I had to click it. What it did was give me a special (and very unique) offer on the Super Earl Banjo, made by Gibson, and autographed by none other than Earl Scruggs. Even though I’m not a bluegrass player, this is an interesting find and a wonderful deal, even though the price tag is $49,955.00, which is way beyond my $2.75 budget for gear. After being let down by my lack of funds, I wandered through the site. I was actually quite impressed with their selection of the usual suspects (Gibson, Fender, etc.) as well as some other names like Blackstar, Egnater, and a ton of other brands from the more boutique side. Over all, the site is quite nice, even if it’s a bit generic looking. www.music123.com

From generic looking to even more, uh, generic looking. American Musical Supply doesn’t exactly look like the best site in the world, but it’s the content that matters when it comes to any site. AMS provides access to their top selling merchandise right on the front page, which is a good move. Also, their navigation bar is easy to use, even if it does look unnecessarily expanded. AMS even features a wish list system, where you can register for things that you want and con your friends and family into checking it out. You might even be able to try to register here for wedding gifts, but I wouldn’t recommend trying with you-know-who around… For a site that looks a bit less together than Music123, American Musical Supply still provides an easy to use site and some good deals to boot. www.americanmusical.com

Seriously…are all of these guys using the same web designer? Ah well, that really does not matter very much when you are looking for great prices. On that note, zZounds delivers. They offer an easy to use site and even a printed magazine for those of you who might not be inclined to purchase over the internet. Most prominent on the site is the large box, right in the middle, that displays their most recent price reductions. That, to me, is a wonderful feature…the ability to find great deals without having to dig through the site (or tweak URL’s like you might with some other sites). zZounds is a reputable site as well, having been around for quite a while. www.zzounds.com

For musicians, the name Guitar Center usually conjures up images of a large store which, to me, is the holy grail of music stores. They have tons of gear (literally) and locations all around the US, and now, the option to buy from them online. One thing that sets this site apart from lots of other musical equipment sites is its content. Guitar Center features reviews and interviews in addition to the aforementioned tons of gear. Combine the ease of use of their website with their annual Green Tag sale, and you’ve got a whopper of a website! Of course, they don’t stop there. Their site also features other services, such as their Musician Finder, which helps you do just what it claims – find musicians. They also offer CD duplication, online guitar lessons, and a few other nifty things. Guitar Center gets five stars for their site. www.guitarcenter.com

From the first time I realized that I could order guitar stuff online, I have subscribed to the Musician’s Friend catalog which, like zZounds, makes it easy for you order gear any time. Their site is also easy to use, and their unique feature is their ‘Stupid Deal of the Day’, which is usually something that has been dramatically price-slashed (like today, tunable bongos for under $20). Again, this site has more than just equipment, they also have books, clothing, and downloads that are sure to help out any musician. Their site is well put together and offers some pretty compelling deals. Oh, and one more major benefit – Musician’s Friend also accepts PayPal! Can you say ‘hooray’? I knew you could. www.musiciansfriend.com

All of these sites have some good deals and a good reputation to back them up. Of course the sites that featured more content than just prices tended to get my attention more easily. When it comes to purchasing musical instruments and gear online, any of these sites will suffice, but if you want a site that can keep your attention, satisfy your equipment lust, and educate you, I would recommend Musicians Friend and Guitar Center. Places to avoid… my vote goes to Amazon.

EMG Inc have released their new line of high-output guitar and bass pickups for all styles of playing – The X Series. These pickups have an exceptional organic nature to their overall sound due to […]