Most people rip on anything made by foreign manufacturers, and demand it be made in America. Those who fit this bill are missing out on one of the best reissued guitars to date, the Fender ’72 Telecaster Deluxe. 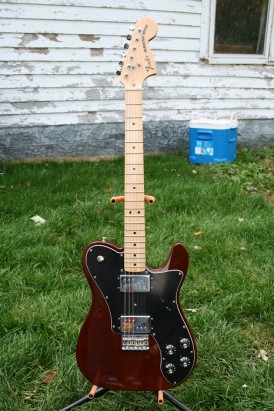 I’ve owned this guitar since October 2006. I saw it hanging in a Guitar Center. I noticed the strings were brand new; the plastic still on the pickguard… this axe must have just hit the floor that morning. But the one detail about this beauty that blew my mind was the neck: it was flamed… so beautifully flamed. I had been lucky enough to find a stock Tele Deluxe with a flamed maple neck, and I wasn’t letting it get away.

Pulling it off the wall, I found a sales rep, told him I wanted to put this baby on lay away (which of course he was ecstatic about because he may make a sale without any effort whatsoever, talk about a reverse world!) I gave him all the money I had on me, which happened to be $20. I went home, put my faded Gibson SG (with the half moon inlays!) on eBay, and 2 weeks later I went and picked up my Tele.

What people don’t understand about this guitar is that it’s extremely versatile. You can make it sound like a Les Paul, and you create a beautiful clean tone that’s very similar to what most jazz guys seek in a hollowbody. This is thanks to its incredible Seth Lover wide-ranged humbuckers. These things sing, and never stop singing. They aren’t the hottest pickups, but they’re wound just enough to give most amps that extremely warm breakup.

Next comes the neck and fretboard. It’s a standard ‘C’ shape, not too fat and not too thin. The fretboard has a 12” radius which I cannot stress enough the importance of. I get so discouraged any time I pick up a guitar that’s fretboard isn’t flatter than this. Yes, I’m saying that when I pickup most $3,000 Les Pauls or Stratocasters, I’d rather have my Tele Deluxe. I want to be able to bend my notes, send them further than any radio transmission that reaches space will go!

The thing I noticed once I brought my Telecaster home was that it stayed in tune SO WELL. My biggest pet peeve I noticed at this point in my playing was guitars not staying in tune. I had a Stevie Ray Vaughan Stratocaster that I paid over twice the amount for and it went out of tune all the time. The Tele Deluxe loves to stay in tune. There’s nothing better than ringing out an A chord and just letting it go for days… and it stays perfectly in tune. I love it.

If you haven’t played one of these guitars yet, please do yourself a favor and find one. Tune it up, but don’t plug it in. Play it unplugged. Notice how loud it is? Most players don’t know this, but the louder the electric guitar unplugged, the more sustain and prowess the instrument will have when played through an amplifier. The Fender `72 Telecaster Deluxe is one of the loudest guitars I’ve played unplugged, and rightfully so.

This guitar croons on a mellow night, and shreds any metal line apart. Cool, your Jackson sounds hot and awesome. Watch me use half the amount of gain and get a more articulate sound… a richer, defined tone that can pull off just as many pinch harmonics as the next guy. This guitar plainly put, is the sh*t! Find one, play one. You’ll love it!

Dimebag and his FURMAN PQ-3

Have you ever wanted to hear what a few EL34’s and some 6L6’s blended together in your powerstage sounded like? Orange Amplifiers has struck a distribution agreement for a new technology called DIVO Tubesync that […]