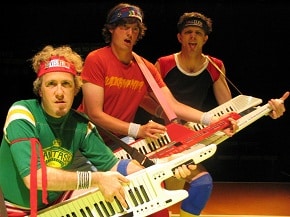 Almost every day, someone is trying to invent the next big thing in the industry of music. Though, sometimes what people think is a truly great innovation can become an awful creation.

Autotune
I’ve already written an entire article on how autotune has, for the most part, enabled vocalists to deceive listeners by morphing poor vocal performances into opera-esque masterpieces. This technology, sometimes useful, has come close to destroying real talent in the music industry. Instead of singers having to really hit notes, a computer will fix their mistakes. It’s like a giant slap in the face and completely takes the skill and ability out of the equation. I can’t help but know readers will say that it’s not a terrible invention, so I’ll just say that the OVERUSE of Auto-Tune is really the tragedy. More often than not, overuse is always what’s going on.

The Keytar
Sure, you can argue with me that your Keytar is the best thing since sliced bread. Well, that’s where we disagree. A piano is made to be played like a piano, not a guitar. “Well, it was innovative.” Yeah…innovative in the completely wrong direction! A guitar is a guitar, and a keyboard is a keyboard. The sound a keytar makes is completely horrendous. It just looks extremely dim-witted too.

The Genre of Nu-Metal
Back when I was in middle school, Nu-Metal was all the rage. A slight mash up of hard rock/hip hop, screaming and singing, it dominated the music industry. Not only did this genre bring some mediocre music, but some GOD AWFUL guitar tune. Turn up the bass, set the treble at 11, and scoop those mids baby: KILL ME. Quite possibly the worst guitar tone ever conceived.

I do recall a few Linkin Park songs that I was into, but for the most part any other Nu Metal band I heard killed me. I was willing to Van Gogh both of my ears if it meant the end of this nonsense. Thankfully and rightfully so, Nu-Metal died out shortly after its conception.

Ticketmaster
You may think that this doesn’t really apply, but it does. Ticketmaster has destroyed the ability for many people to see the musical acts they love due to the fact that some middle man that really does little for a show adds a ludicrous amount of hoops and fees for the consumer. Ticketmaster could be one of the worst things to happen to the music industry in the past century, or ever. They have no business doing what they do. Kudos to the local promotion companies they are keeping shows fee-free with reasonable prices that everyone can afford. I HATE Ticketmaster.

I love music, and compiling this list of disgust was a bit difficult. If you have any inventions to add that we could do without, please leave a comment or a paragraph telling us about an invention that’s musically useless or crippling.

You might be reading this because you are shopping to buy your first electric guitar or buying it for someone else, or you’ve been shopping for years but were never quite sure what terms like […]