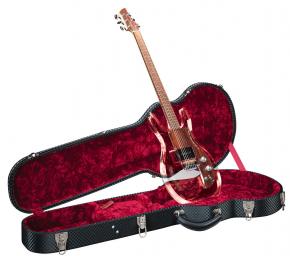 When Dan Armstrong designed his acrylic-bodied guitars in the late Sixties, his goal was to create an instrument whose rigid, synthetic body would produce a high level of sustain. Whether the experiment was a success is a question still open for debate in guitaraholic circles around the world. However, one thing is certain: when Keith Richards took on of the unusual instruments out of the Rolling Stones’ 1969 American tour, it became an instant classic, copied repeatedly during the Seventies by Japanese companies such as Univox and Ibanez. Guitarists ranging from Aerosmith’s Joe Perry to Black Flag’s Greg Ginn would embrace the Dan Armstrongs, perhaps hoping to incorporate a bit of that consummate Keef cool into their own six-string arsenals. Until now, finding one of these long-discontinued beauties (or its four-string sibling) has involved endless pilgrimages to vintage guitar stores or sleepless night spent poring over the want ads. Ampeg had reissued these charismatic classic (which, like their many copies, are made in Japan) and incorporated a few welcome improvements in the process.

Advertisement————————————
————————————————————
An unlikely combination of high- and low- tech elements, the Ampeg Dan Armstrong guitars ($1499) and basses ($1499) combine comfortable, 24-fret, rosewood-capped maple necks with acrylic bodies, ingeniously designed interchangeable pickups and—go figure—totally unadjustable bridge systems. While the original guitars from the late Sixties and early Seventies used a wooden bridge system fitted with a straight piece of fret-like wire, the reissue’s bridge (still wooden) is fitted with six compensated (and still non-adjustable) brass saddles that drastically improve intonation. The guitar’s pickguard, made of woodgrain-like Formica, looks like something taken off the kitchen cabinet of a low-rent RV and is one of the instrument’s most endearing features. Both the bass and guitar versions (which are available in clear or grey “smoke” acrylic for a surcharge) feature reasonably stable Japanese tuning machines and tone and volume controls with silver plastic knobs just like those found on Ampeg’s late-Sixties amps. The guitar has a three-way switch that bypasses the tone control in one position and changes its capacitance in the other two. The bass has a two-way switch that dramatically changes the characteristics of the tone control as well.

Running the Dan Armstrong guitar (in true vintage Aerosmith fashion) through a Seventies Musicman amp, the instrument produced searing, tight-fisted tones from either of the interchangeable Kent Armstrong single-coil pickups. The “Rock Treble” pickup had the bright punch of Fender Esquire, while the “Modern Drive” unit produced a fatter, P-90 like growl. The Armstrong bass, run through a vintage Ampeg SVT stack, was a thunderous winner despite its short scale. With the stacked single-coil “Bright Bass” pickup installed, the bass produced fat, punchy and refreshingly crisp tones that easily went head to head with a ’64 Precision bass caught loitering in the studio. With the “Dark Bass” until installed, it had the rumbling oomph of an old Gibson EB-0.

While their acrylic construction makes these instruments a bit heavier than your run-of-the-mill electrics, they more than justify their weight with distinctive tone and an undeniable aura of cool.

Gear-Vault Classifieds is an eBay alternative. Come sell with us!

While you are at the absolute beginner stage of learning electric guitar, it is very important to learn full songs. Besides the obvious – that you can play the songs you learn for your friends – playing actual songs instead of scales or chord changes is mandatory, because it will make you a better player. You can’t learn timing and foot-tapping by drilling scales; you can’t learn strumming patterns by changing chords all the time. Things like these come only from playing songs—and playing them a lot. This article will show and explain how to play easy guitar songs […]

Originally published on: Jul 17, 2009 @ 3:05pm Danelectro guitars have long been known as great, affordable instruments and many guitarists have used them for everything from entry-level department- store thrillers to character-filled alternatives to […]