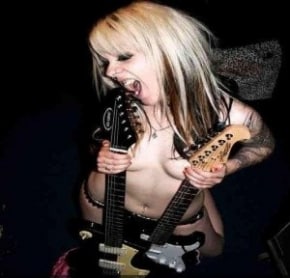 All gigging musicians get lazy at times and try to get by with the least amount of gear possible on any given job. This mostly happens to players who gig a lot and move their own stuff. Folks who play one gig a year usually like to bring as much stuff as possible because setting up outside the house is a novelty to them. If you play out ten or more times a month and, like most of us, can’t afford a road crew quite yet, there will come a time when you are tempted to roll out to your gig with a very small pile of equipment to move.

As a regular gigger myself, I totally understand wanting to do this, but I am here today to tell you why this is a bad idea. When playing out, whether locally or on the road, the path to righteousness is to plan for the most messed up, disaster-filled night possible and then be glad when the worst doesn’t happen. In other words, gentle readers, you better have some backups. It is vitally important to have duplicates or substitutes for pieces of your rig that, if they failed, you would not be able to play your show without. Does this mean extra work? Yes. The trade-off for the extra work, however, is the peace of mind that comes with knowing that no matter what happens short of a natural disaster, the show will go on. Most of the bigger items can stay in the van until they are needed and the small things can stay in your gig bag, so the workload isn’t as bad as you might think.

If you have a complicated rig, you will need more backups than someone who uses a simpler rig. My own set-up is pretty straightforward, but I still carry two of everything. That means two guitars, two amps, extra instrument, microphone, and electrical cables, stage tape (the musicians sewing kit), two equipment dollies, two music stand lights if I am reading charts, picks, batteries, towels, my own food, bottled water (especially when playing outdoors), and a change of clothes.

If you have any must-have pedals or processors, you had better bring two of those, as well. It seems like a lot, and I have been called ‘obsessive’, but I have never been the cause of a gig not happening because of an equipment failure. Very often, I am the only guitarist on the job, so I can’t beg or borrow a spare anything from another player, so it is better that I just bring my own. In fact, there have been many nights where other band members have had gear issues and used my backups and, if I hadn’t had them, they would not have been able to perform. We all want to lighten our load but sometimes you just have to have what you have to have. GEAR SEARCH

Guitars are simple, right? Most of us know what we like, which family tree (Leo or Orville) our axe of choice descends from, and all of that. Amps, however, are another matter, entirely. There are […]

By nature, humans aren’t pro-active. Expending energy to avoid potentially impending doom just isn’t our way. So it’s no surprise that guitarists typically won’t take an amplifier in for service until it makes fart noises, […]

There seems to be an awful lot of interest these days in tube amps that put out lower amounts of power, especially in more boutique, cork-sniffing circles. Just about every amp company has some kind […]