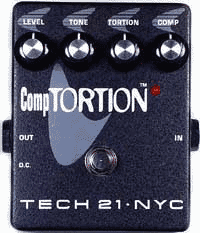 Distortion and compression are twin faces of the same personality. Compression can give a guitar the violin like sustain many players seeks in a good distortion pedal, while distortion can iron out transients in a way similar to a compressor. The marriage of both effects in one pedal would seem a foregone conclusion, but a noise gate would be required to eliminate the resulting noise, and the interaction of all three items adds up to a rather dysfunctional family.

You can thank Tech 21 for organizing everything into one stomp box sized pedal without sacrificing a drop of professional sound quality. The CompTortion features controls for level, tone, compression, and distortion. Each effect can be dialed up independently or mixed together in whatever ratio you need. The noise gate is hardwired into the circuit and requires no controls. As an added testament to the lack of coloration in the CompTortion’s signal chain, both the compression and distortion can be dialed down, leaving a clean signal which can be boosted 12db via the level control.

The pedal’s compression circuit is powerful, providing a range from 1:1 to a totally squashed 15:1. Lovers of country rock and power pop will embrace the clean compression settings. If you crave the long, vocal sustain of Robert Fripp or Tom Sholz, simply back off the compression and add more overdrive. Lose the compression altogether and dial up the tortion to find out why Kurt Cobain was so fond of the Tech 21 pedals.

The End Line – For those who crave effects of a more schizoid mature, the CompTortion is the Swiss Army knife of pedals, with noise suppression circuitry and an analog signal path… Just fantastico!

When the word got out that we are reviewing Electro-Harmonix’s reissue of their Micro Synthesizer, reactions were decidedly mixed. Some exclaimed, “It’s about time they reissued it!” Others muttered quietly, “Yeah, I had one once, […]