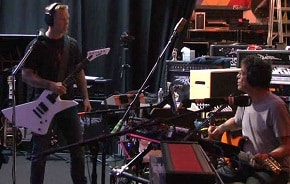 Apocalipsis, apocalisse, or apocalypse. All of these words mean the end of the world. There is one other word for it—Lou Reed. At least in a musical sense.

Oh yes indeed, ladies and gentlemen. Lou Reed has Recorded an album with Metallica. With Metallica. WITH METALLICA. Don’t bother googling this story for its authenticity—it’s real folks. After a loose lipped Kirk Hammett started talking about the new Metallica album that wasn’t “100 precent a Metallica Record”, speculation swirled. That was a few months ago.

Even now that the collaborator has been uncovered, information on the matter is still scarce. Metallica released a statement on their website on June 15th, with the highlight statement being “We are more than proud to announce that we have just completed recording a full length album that is a collaboration with none other than the legendary Lou Reed”.

Metallica and Reed got the idea to work together after a performance at the 25th Anniversary of the Rock and Roll Hall of Fame at Madison Square Garden, in late 2009.

So that’s it. No song details, no album title, nothing. What we do have is that there are 10 songs, which were recorded at Metallicas home studio in the San Francisco area.

So what do you think of the matchup? I’m gonna call it right here; this looks like a major flop in the works. It might be interesting at the most, but I call fail here. We are all curious to your thoughts and opinions on this, so comment below!

Brian Vodinh is one of the founding members of alternative metal band, 10 Years. He started off as the drummer for the band, but later switched to guitar. Some of his band members say he […]