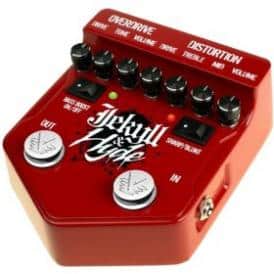 Literature’s most famous split personality takes musical form in this two for one pedal. Many players use two distortion pedals—one for a mild, tube overdrive and another for a fuzzier sustain. Stomp them together and you get sonic meltdown. The trouble is the slightest tweak can result in annoying microphonic feedback or impotent mosquito buzz.

Bless the good Dr. Jekyll and his more aggressive alter ego, Mr. Hyde, for getting these two distinctive sounds to work together so well. The Jekyll & Hyde Overdrive is a maximum bang per buck bargain. Enclosed in a sheet metal casing worthy of a Sherman tank, this Siamese twin of sound boasts two selectors’ switches two status lights and a row of knobs that beg you to bend over and tweak em.

Jekyll the milder mannered channel can be shaped with drive, tone and volume controls. The voicing is very much of the Ibanez Tube Screamer/ProCo Rat School of overdrive, delivering a steroidal version of your basic signal with lots of dynamic headroom. The high midrange is gritty yet well balanced and a nice tube like honk appears in the low end when you roll back your tone control. Hyde, the aggressive half of the team, is brought out with drive, tone, eq, and volume controls as well as a sharp/blunt switch. Compared to Jekyll, Hyde has a little higher end edge coupled with a tight and sweet bottom that gives most settings the added thunk of 4×12 cabinets. The eq control mixes the ratio of lows to mids and in the extreme clockwise setting it nails the scooped mid sound once beloved of Metallica.

While the effects can be used independent of each other, the real fun begins when they are both on. Push the brighter aspects of each channel and you’ll arrive at a tone that could shame the sun, with squealing pick attack and effortless harmonics. The darker side will create the illusion of a wall of Marshall’s, even when using a little 20-watt solid state practice amp. But beware: like any true psycho the Jekyll and Hyde can push too far. Max out both drive knobs and the resulting feedback won’t be pretty.

The End Line
The Dr. Jekyll & Mr. Hyde is a serious gigging tool for lovers of overheated overdrive, one that is easy to use and sounds great.

WHO COULD HAVE imagined that a decades-old company solely devoted to pickup winding would suddenly set the guitar industry on tilt with masterfully crafted pedals like the Twin Tube Classic, Lava box, Power Grid, Shape […]

In this day and age, products are so specialized that purchasing anything can make your mind spin. Guitar gear is no exception. There are so many options on the market that buying something as simple […]