All three of the Budda MN-100’s independent channels – Clean, Rhythm and Lead – include separate three-band EQ, Reverb, Resonance, Presence, and true bypass effects loop with send and return levels. Each channel also features OVER-BOOST, a stompbox-style lead boost that engages an additional tube-driven gain circuit to give players a supercharged boost. The effects loop on channel 2 can also be used as a global loop for incredible versatility in effects routing.

The included nine-button foot controller switches all three channels digitally via MIDI, effects loops and OVER-BOOST functions, as well as Master Reverb and Master Boost, which is a second Master Volume control that can be used to boost the overall volume of the amp. 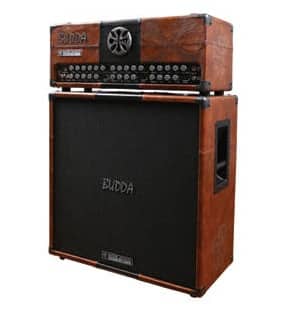 The Budda MN-100 also features a half-power switch for operating the amplifier in either 60- or 120-watt mode. The back panel features an amplifier chain section with power-amp inputs and a slave output, impedance selector and MIDI input and output for use in MIDI-switching rigs. The matching MN-412 enclosure features four Budda Phat 12 loudspeakers and luxurious Mark Nason leather covering.

In a unique convergence of modern precision and old-world artistry, this multi-faceted, innovative amplifier found its aesthetic equal in the custom Italian leathers, signature embellishments and metalwork of renowned footwear designer Mark Nason. No stranger to the rock & roll lifestyle, Mark Nason’s signature couture creations stride easily from Sunset Strip to centre stage on the Budda MN-100 and MN-412. For those who crave both tone and luxury, the MN-100 is simply the best amplifier money can buy.

We all know who Orange is. World renown for making some of the nicest, sleekest valve amplifiers, they’ve been working on a high gain monster. Behold, the Dark Terror! The idea behind the Orange Dark […]

Rivera Venus series has been making big waves in the amp world, and with good reason. The Venus amps are the company’s first foray in Class A designs and they are taking things way beyond […]