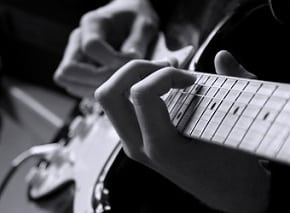 Few dictionary entries are as subjective, or as relative, as the word “easy” (adj., not hard or difficult; requiring no great labor or effort). This is especially true when it comes to music, and for some reason, for the guitar. Some people will find the guitar to be easy to play right from the outset. Others cannot fathom even the most rudimentary of concepts – even if they are already music-savvy and proficient in other instruments.

One thing is certain: You’ll never be able to play guitar if you don’t pick one up and give it a decent try. Many people become frustrated when (as with most instruments) they run into the need for a bit of music theory background before they can even taxi down the runway. The Internet has made such knowledge easier to access – if not attain – so the margin of excuses has definitely gone down when it comes to learning how to play at least “sociable” guitar.

The first thing you’ll need (other than, obviously, a guitar) is a chord chart. This will tell you which frets to put your fingers on in order to properly form a chord. Then you’ll need to figure out chord progressions, the way in which D goes with G and A, or the way A goes with D and E, and so forth. If looking at online instructions or at a book doesn’t help, a few basic guitar lessons with an instructor might be the way to go.

(There is one caveat that should be issued sooner rather than later. Playing the guitar isn’t an endeavor that comes free of pain. Your fingertips will likely form some pretty hellacious blisters at the outset, which I assure you will turn into rugged calluses in due time. It will hurt for a while, yes, but that’s how it is if you want to earn your six-string stripes.)

Once you’ve figured out basic chords, you will actually be ready to play a few well-known and well-received songs on your guitar. It’s not that hard, as you will see. Whether you play electric or acoustic guitar, alone or with a band, there are certain easy-to-play-songs which are sure to make you a hit around any campfire, family reunion or even on open-mic night.

One of the easiest “beginner songs” is a popular radio hit, by a band called Free, called, “All Right Now“. It sounds a bit like something Foreigner might have put out, and was just about the only thing Free ever put out that made any impact. The reason everyone liked it, and the reason they liked playing it, was that it was comprised of only two chords, A and D.

If you want to learn this song, you can just go to YouTube and find any number of home-brew musicians explaining it to you. Or you can download the lyrics, chords and tablature – all on the same page. Put the two things together and you’ve got a fairly powerful set of learning tools. It would be hard not to be able to play “All Right Now” after minimal exposure to the right information. It’s a simple song, people like it, and it’s a whole lot more impressive than breaking out “Three Blind Mice” on a Saturday night.

Another good beginner song that everyone will recognize is Bob Dylan’s “Heaven’s Door”. You really don’t have to get all dramatic on it the way certain other bands have done. It’s a simple progression (G, D, and A-minor; then G, D and C… Rinse and repeat), it isn’t fast and so doesn’t require great dexterity, and people will be impressed that you know one of the all-time classics. Unless they’re musicians too, they won’t know that you’re playing it because it’s a piece of cake.

That’s kind of the way it is with a number of songs that are in G. That’s the key in which Bob Seger’s “Fire Lake” is played (which is a gravy tune except for a somewhat nuanced bridge in B), as well as Creedence Clearwater Revival’s “Who’ll Stop the Rain”, the Pogues’ “Dirty Old Town” and the Irish folk song “Van Diemen’s Land” (featured in U2’s concert film, “Rattle and Hum”). With a bit of practice, one can come up with a fairly impressive set list just in the key of G.

Neil Young, while considered a musical genius in almost all circles, put out quite a few songs that didn’t require a tremendous amount of musical ability. “Love to Burn”, in particular, is a song that many beginner guitarists can conquer with just a little bit of practice. It’s a dark, brooding song with great opportunities for crescendos and dynamics that will pass for prowess until you really start to get the hang of it.

It’s also a good idea to digest some of the fundamentals of blues music, since blues truly is the foundation of rock and roll. The 12-bar progression is perfectly exemplified in Willie Dixon’s “Talk to Me, Baby”. It’s in D, a key which provides good pop for this percussive song. It’s also phrased perfectly, which makes it easy to sing along with as you play.

From there, you’ll find that quite a few blues songs open up to you, which naturally will lead you to the material played by some of the colossal rock bands of the ’60s and ’70s (Led Zeppelin and the Rolling Stones, in particular, were fond of ripping off the American bluesmen). The oldie “Plastic Jesus”, as best demonstrated by Paul Newman in the film Cool Hand Luke, is in the same key as “Talk to Me, Baby” and uses nearly the same progression, and it’s a sure hit anywhere you play it.

As far as contemporary music goes, many guitar players are somewhat surprised to find that the Foo Fighters have recorded some fairly uncomplicated music. A good one, off their double album In Your Honor, is called “Another Round”. It uses basic chords, they progress nicely, and this particular song doesn’t require the usual screaming Dave Grohl vocals. It’s a contemplative number, and your audience will be into it because it will be clear that you are, too. Leonard Cohen’s Hallelujah is similarly structured and has the same effect – as demonstrated so well by the late Jeff Buckley.

Once you’re comfortable with a few songs, curiosity will kick in, and you’ll start to realize just how simple it is to sound like a pro on the guitar. You’ll understand that much of pop music is churned out in the least challenging way possible, and that some of the most endearing songs of our culture are well within your grasp as a musician. From the Monkees to Social Distortion, a path has already been blazed for those who want to sound like the musicians they have admired for so long.

It will take a certain mentality, though, to achieve the lofty status of amateur guitar player. It’s not as easy as it looks or sounds, but with a little bit of dedication, and plenty of practice, you may even find yourself innovating on the instrument. It all leads to the possibility that one day others will try to learn your songs. In that way, guitar can blossom from a passing fancy to a pathway to virtual immortality. — Beginner songs are always fun to play. If you are an acoustic player, check out these great songs to learn on acoustic guitar.

I would highly suggest purchasing these tabs by your favorite musician and these are the ‘beginner song’ versions towards a novice player.

Have you ever noticed how your low ‘E’ string just never stays in tune? Wondering why it’s harder to play your guitar rather than your buddies’ slick Gibson? The secret to effortlessly traveling along the […]

Guitar Pickup Tips and Tricks For The Best Sound

The heart and soul of an electric guitar comes right down to the pickups. Pickups can be modified and adjusted to change the tone that your electric guitar produces. Messing around with your pickups […]