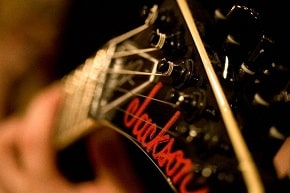 Knowing how to tune your guitar is one of the basic fundamentals when it comes to learning how to play. Once you’ve mastered the “standard” tuning of EADGBE, (I like to remember it as Eat All Day Get Big Easy) you may begin to experiment with other tunings. Tuning your guitar down a whole step and dropping your top D string to C brings us to what most refer to as “drop C.” It’s something that’s become extremely popular due to its easy ability to create “heaviness”, and is one of the many ways modern metal musicians are getting that diverse sound they aspire.

Many players will attempt to cover some of their favorite bands like Killswitch Engage or System of a Down and realize that they cannot get that same sound that these acts boast. Once they understand how to drop the tuning of their guitar, it’s almost as if a whole new world has opened up and the skies have cleared! Alternate tunings have become a way for many musicians to achieve a sound that will separate them from others, while making their songs deeper and heavier.

Although a useful tool, drop C has also become something of a fad among some metal scenes. After a venture to Springfield, IL, I experienced this myself. If you were tuned to drop C or lower and played bland breakdown after breakdown, you were at home, no matter how out of tune or drummer-less you happened to be. It’s upsetting to see such a narrow minded audience in existence, but what can you do? These things will happen from time to time, but who am I to judge?  To each their own: ordinary, and all the same.

If you haven’t reached beyond the spectrum of EADGBE, then I suggest it’s time you do! Different tunings can be so much fun and rewarding to your ears. Just tuning your guitar down half a step to learn Riviera Paradise by Stevie Ray Vaughan, or Bold As Love by Jimi Hendrix, and ringing out an Eb chord will perk your ears up. Hearing a new sound from those same old chords you play day in day out might inspire you to write a new song. It may also motivate you to play one of your songs you’ve already written in an alternate tuning to give it a new sound.

If you’re overwhelmed with the idea of alternate tuning, don’t be! There is a vast array of guitarists on YouTube or Ultimate Guitar that have posted guides regarding tuning in general. As long as you have a guitar tuner to ensure you’re on the right path, you should give it a shot. You won’t be disappointed.

Tuning a Guitar On Crack [How Not To Tune Your Guitar]

There are few things as beautiful as the sound of a well tuned guitar. Which is why, clearly, it’s necessary to play with your guitar strings at least as often as you play with yourself. […]