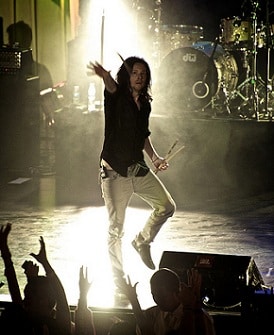 We have all seen it before; drummers whipping their drum sticks out into the crowd at the end of a bad ass concert. Generally I think that we all just assume that someone in the crowd catches the sticks and ends up with a really awesome concert souvenir. This is usually true, but what about an audience member getting lambasted upside the head by a flying drum stick? There are a lot of questions that come to mind: Do audience injuries from flying drum sticks occur? If so, why do we seldom here about it? Do lawsuits get filed over something like this? Would it be the venue’s liability or that of the band and/or drummer in question?

After an exhausting gauntlet of research online, I actually had a very difficult time finding any information on drum stick related injuries. I did however find a great video clip of Foo Fighters’ drummer Taylor Hawkins chucking his sticks into the crowd at the end of a concert at the Sydney Acer Arena in Australia. The girl that ended up being hit by the flying drum stick seemed to be just fine, with no major injuries.

More often than not, the drummer is actually the one who ends up getting hit in the face by a drum stick. There are several cases of drummers ending up with broken noses due to self-inflicted drumstick head shots.

Concert goers should know and understand the risk when attending a musical event or concert. A venue or band should not be required to put a disclaimer about flying drum sticks on the back of their tickets. In the end it is just common sense.

It may have been an epiphany when the idea for her Swirly-Gig products came about. Maybe it was too much time spent playing with a Slinky, maybe it was frustration from too often reaching for […]

Famous Drum Sets No.1 – The Contraption

As I began to think about how (and with whom) to start this column, something occurred to me… pianos. Pianos are exactly the same no matter who sits down to play them; none of the […]