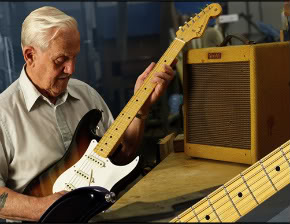 The 20th century will be remembered as an age of technology. And the electric guitar has been one of the most benign technologies to emerge from our troubled outgoing century. Like the innovations of Thomas Edison or Henry Ford, the electric guitar is a great populist invention. For the most part, it wasn’t dreamed up by people with college degrees in design engineering but by hard-traveling musicians and practical-minded businessmen clawing their way out of the Great Depression.

One of the greatest of these pragmatic mid-century geniuses was Clarence Leo Fender. Born on a farm near Anaheim, California in 1909, Leo Fender was operating his own radio repair shop in nearby Fullerton by the mid Forties. Thanks to the post-WWII economic boom, this was an era of great prosperity, marked by exciting new inventions like television, a middle-class migration out to the suburbs and the birth of sleek new design aesthetic that was streamlining everything from home furnishings to automobiles to electric shavers and hair dryers. Opportunities were plentiful for entrepreneurs and inventors of every stripe, which suited Leo Fender just fine.

Circa 1943, Fender built a very simple solidbody electric guitar that he’d rent out from his shop. (Fender Radio Repair also rented P.A. systems and even a panel van with speakers mounted on top to advertise local events!) In a garage out back, Leo began making lap steel guitars under K&F brand name in partnership with Doc Kauffman, another bailed out of the business in 1946, Leo continued on his own, starting Fender Electric Instruments in 1948. One of the first people he hired was George Fullerton, who became his assistant and lifelong business associate.

“Leo was quite a simple man in his dress and his actions, even though he was a genius,” says Fullerton, who still lives in the town whose name he shares. (He is distantly related to the family that founded Fullerton.) At first, George was reluctant to go to work for his friend Leo. “But then one day Leo took me to lunch and said, ‘I’m interested in designing and building a solidbody electric guitars. Would you be interested in going in with me on that?’ That really turned me on. So on February 28, 1948, I started working full-time with Leo.”

The guitar Fender and Fullerton were working on would initially be known to the world as the Broadcaster, and ultimately, the Telecaster. Nearly everything about the instrument was completely revolutionary, starting with its bolt-on neck, a Leo innovation that allowed the instrument to be dismantled far more easily and quickly that a conventional guitar, where the neck was glued to the body via tongue-in-groove joint. Says Fullerton, “Leo decided that what we needed to do was design an instrument where you could replace any part in a few minutes and have the player back to work, and not cost him an arm and a leg.”

The Broadcaster was designed to be a practical, affordable, workingman’s instrument. The body was an unadorned slab of solid wood, a design intended to eliminate feedback and the uneven resonant properties of an electrified archtop. Fender was out to give his electric Spanish guitar the clear, clean tone he greatly admired in steel guitars. “We decided that we should make the body at least resemble a conventional guitar a little bit,” says Fullerton. “We put a cutaway on it, so you could get at all the frets. Since it was solid wood, we had to make it smaller than a conventional hollowbody, so that it would be light enough for the player to hold comfortably.”

Dissatisfied with the uneven magnetic response of Beauchamp’s horseshoe-style pickup design, Leo devised pickups with individual pole pieces. In addition, the Broadcaster’s frets were inserted directly into the neck itself, rather than into a separate fingerboard glued to the neck, and the tuning keys were all on the same side of the headstock. It was the first time that these innovations—many of them devised with input form local country-and-western players—appeared on a guitar.

The instrument was still called the Broadcaster when it first came on the market in 1950. But fearing a legal tussle with the Gretsch company, which manufactured a Broadkaster drum kit, Fender changed the name to Telecaster in 1951. “We’d named it the Broadcaster because, in the early days, radio broadcasting was the main thing for music,” recalls Fullerton. “But television was becoming popular right about the same time that we had to change the name. [Television eclipsed radio as America’s main entertainment medium in the years between 1947 and 1955.] We thought, ‘Now we’ve moved up a step.’ So we called it the Telecaster.”

But it was the ton, no the name, that made the Telecaster an instant success in the Fifties, and an instrument that is still widely played today. Here at a new century, the Telecaster is a cornerstone of our collective notion of what an electric guitar sounds like. “Once we got the Telecaster finished and put into production, we couldn’t make them fast enough,” says Fullerton. “And then Leo told me, ‘Now we need to start thinking about an electric bass.’ Of course, at the time, there was no such thing.”

DBZguitars — Legendary guitar builder, Dean B Zelinsky, sent us an image of their newest addition to the DBZ Guitar family. Check out the DBZ Peacemaker Cavallo V guitar. This is more than just a […]