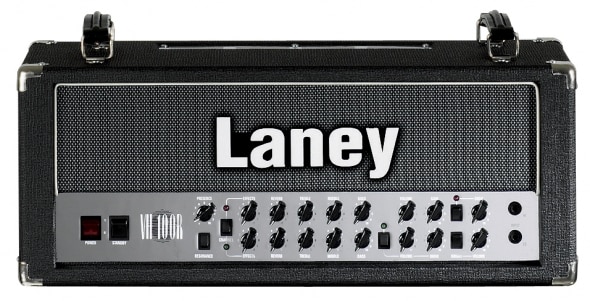 Laney Amplifiers, like Marshall and Orange, is one of the old school British amp companies that helped define what many of us consider the proper sound of a rock and roll guitar through a tube (or valve, to be more UK-oriented) amplifier from the 1960’s to today. Laney has made many fine products over the years, but one of the company’s newest and most modern offerings is the VH100R head. More than a simple one-channel plug and play rock and roll machine, the VH100R is an extremely versatile and up-to-date two channel affair whose mission in life is providing guitar players with as much tonal variation and flexibility as they could possibly need.

The two foot-switchable channels each have a foot-switchable gain boost, three-band independent EQ sections, and independent reverbs, which allows VH100R operators to instantly go from super clean tones to medium grind crunches to full-on stack distortion at the flick of a switch. Laney has also allowed for the fact that many of today’s players use many different types of outboard gear to color their sound by giving the amp five (count ‘em) discrete effect loops to provide for the many ways guitarists like to plumb effects into their systems.

A quick inspection will find side-chain effect loops for each channel, as well as a global loop that works across the entire preamp section. There is an insert loop that runs in bypass, side-chain, or insert modes that also has a dedicated return level control, and a preamp out/power amp in loop to wrap it all up. This may be the most loops found on any amp made today. Other pertinent facts about the VH100R are that it is a Class A/B 100 watt unit running ECC83 tubes in the preamp and EL34’s in the power section, with a switchable bias to let users run 5881’s if they so desire. It also features high and low input jacks, a bright switch on the clean channel, 8 and 16 ohm speaker outputs, and an included footswitch, the FS4. Retail price is $2299.00.

The VH100R can be currently seen on a wide variety of concert stages around the world and is the amp of choice for players ranging from Bill Kelliher of metal stars Mastodon to Bryon Shepherd who plays behind American roots legend David Allen Coe. This fact alone should give those considering one of these amps just how much ground the VH100R can truly cover. Every amp maker claims versatility, but Laney seems to be actually delivering the goods in this area. Combine this with the decades of amp experience the Laney Company has behind it and this might be a worthy contender for any Gear-Vault readers’ new amp dollar. Visit your nearest Laney dealer and heat one of these up and see if you can do as much as this amp can.

We all know who Orange is. World renown for making some of the nicest, sleekest valve amplifiers, they’ve been working on a high gain monster. Behold, the Dark Terror! The idea behind the Orange Dark […]

The first step in building your very own beer can amplifier will be to get an empty can of the beer of your choice. After you have your empty can you will need to remove […]