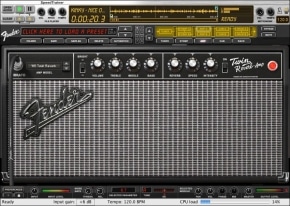 I’m going to let you in on a little high-level industry info: Fender is hyper-picky (but in a good way). In fact, Fender is so militantly nitpicky and protective about the sound of their guitars and amps that no software modeler has ever been allowed to use the Fender name outright–until Fender and IK Multimedia teamed up to give you the full-on Fender tone experience.

A further bit of insider info: there’s never before been such an intense collaboration between hardware and software manufacturers–and to get it right, Fender chose IK Multimedia. With that in mind, let’s talk about AmpliTube Fender and AmpliTube Fender Studio, and what it means to have the blessing of Fender’s hyper-picky, ultra-militant tone gurus.

To get that blessing, IK spent two years (that’s like 20 in software years) working closely with Fender engineers. Up against the makers of major musical mojo since 1946, IK had to come up with some serious mojo too–and they did, with their DSM (Damn Series Mojo) technology. Okay, it really stands for Dynamic Saturation Modeling. Let’s talk about the musical problem it solves. Generally, amp models don’t respond to your playing the way an actual amp does. In a real tube amp, distortion increases or decreases with a continuous rate of change based upon the guitarist’s dynamic expression. Typical amp modelers will superimpose only one distortion “snapshot” across the range of input levels, creating the same distortion tone varied only by volume. Your ear detects this–disappointed! Of course, due to its very nature, distortion is a lot easier to get away with than clean sounds, where subtle changes are easier to hear–and that’s where IK’s models shine.

Instead of superimposing static models over a sound, DSM replicates the non-linear dynamic response of analog circuits by continuously morphing the sound as your expression changes, just like a real-world amp or tube. IK also developed VRM (Volumetric Response Modeling) technology for the Vibratone, a Leslie-style rotary speaker cabinet. For the first time, software is able to emulate the physical behavior of a rotary speaker moving air.

AmpliTube Fender gives you 45 models, including amps, cabinets, stompboxes, and rack effects of the legendary variety. That’s $38,500 worth of history-making Fender tone for under $200. For example, there’s the ‘57 Deluxe; the ‘59 Bassman, the classic blues amp used by countless guitarists; the Super Reverb; and if you’re searching for Stevie Ray Vaughan, IK modeled his ‘64 Vibroverb with custom mods by the late amp guru, Caesar Diaz. Plus there’s the Super-Sonic, the face-melting Metalhead, and the Champion 600, which found its way into numerous classic rock recordings. There are also models that extend the vintage Fender clean machine with modern sounds. You can even mix and match amps and cabinets to create your own custom Fender sound–something impossible to do with the originals.

Completing the package is Fender Studio, the easiest, all-in-one way to record classic Fender tone into your computer. It comes with 15 amp/cab/FX models and a clever little device called a StealthPlug, an audio-interface-in-a-jack that lets you plug your guitar directly into your computer via USB. It also includes an excellent trainer; Riffworks T4, an easy-to-use recording sequencer made specifically for guitar and bass players; and X-Gear–a shell-host that allows you to combine your favorite IK Muiltimedia amp and FX models with AmpliTube Fender for near-limitless sonic options.

Render that which is Fender’s unto sequencer

Presently, I’m working on a guitar-heavy song in Cubase with acoustic, clean, and distortion guitars. My first surprise came with my ‘57 Deluxe on the clean guitars. As I played with more intensity, the “amp” added crunch. As I backed off, the sound cleaned up. The same thing happened when I turned down the guitar’s volume knob; just like a real tube amp. Since I was going for a big surprise when the heavy guitars kicked in, I tried the Metalhead. My response: “Oh, there’s my sound.” Of course, I can never leave well enough alone, so I decided to see what a little ‘57 Deluxe crunch could do. The sound jumped out of the speakers. I like it when a sound brings out the maniacal “it’s alive” chortle of Baron Van Rhuehl having a good day in the lab. Eventually, I settled on the Champion 600, which gave me the biggest sound. Funny thing there, some of the biggest-sounding rock records were recorded with a small Fender practice amp, so in a big way, this is a testament to IK’s DSM modeling since the Champ 600 model behaved precisely the same way.

I got what I expected with the Bassman 300 on a bass guitar track I had recorded, but applying it to a virtual instrument track yielded surprising results. I had also sequenced an arrangement of Steely Dan’s “Rikki Don’t Lose That Number” using a Music Man bass sample, which sounded quite good, but with the Bassman 300, it really came alive with added detail, and wrapped in a rich, deep envelope. Usually, I use MIDI bass tracks for composition and then record the part with a bass guitar. In this case, I can save myself the extra steps. With the Bassman preset, I’m perfectly happy with the virtual track. Just for fun, I routed the piano (also virtual) to an FX channel with a Clean two-mic ‘57 Deluxe preset. It too came to life. Just a few instances of AmpliTube Fender was all it took to make a simple four-instrument mix sound big and lively.

De Fender of the crown

It didn’t take more than one preset to know the IK has nailed it, and that the promise of an affordable plug-in as a substitute for a private museum of collector’s amps has finally been fulfilled. And whatever style of guitar music you’re making on guitar or bass–country, blues, rock, punk, metal–in live performance or the studio, there’s an AmpliTube Fender sound that’s going to work for you. And I promise you’ll be hard-pressed to tell the difference between AmpliTube Fender and the real thing. To my ear, AmpliTube is the reigning king of Fender amp modeling.

Most people rip on anything made by foreign manufacturers, and demand it be made in America. Those who fit this bill are missing out on one of the best reissued guitars to date, the Fender […]

Bugera BC30 and BC15 Guitar Amplifiers

Bugera has become one of the most popular amp companies out there due to a winning combination of price and features. Bugera’s great offerings, the BC30 and BC15, will undoubtedly continue in this tradition, providing […]