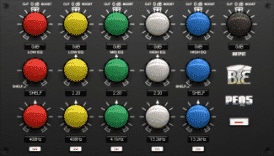 BTE Audio has added to its line of Equalization Algorithms with the PEQ5. The PEQ5 is a high performance digital equalization algorithm simulates the sound and feel of the world-renowned parallel parametric equalizers. With its proprietary topology, the PEQ5 algorithm simultaneously achieves both extreme high processing efficiency and sonic accuracy. Targeted at desktop and embedded professional audio applications, the PEQ5 algorithm will enable quality-conscious third-parties to incorporate the well-regarded High-End Outboard EQ sound into their system.

In earliest parametric equalizer units, all filter bands are connected in parallel rather than in series-cascade as in conventional parametric equalizers. The parallel architecture has a distinctive musicality due to different phase behavior and smoother interaction between adjacent bands. In order to achieve symmetrical curves for boost and attenuation, filter bands are placed in feedback paths during attenuation. While trivial to implement in the analog domain, implementation of these feedback paths in the digital domain is rather involved due to the resulting delay-free feedback loops which are considered as uncomputable in classical digital signal processing theory. The PEQ5 Algorithm accurately and efficiently simulates the latest version of second generation units in the digital domain with its meticulously designed topology which inherently has the ability to authentically emulate delay-free feedback loops.

Here is an older video of Mike Edison, former publisher of High Times, performing on his bong guitar. What Mike is playing (and smoking from) is a guitar named “ChroniCaster“, which is essentially a bong […]