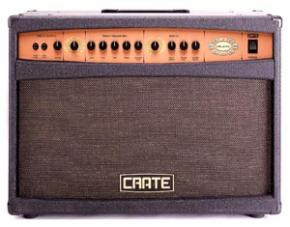 With its brushed copper front panel, big black knobs and jellylike, illuminated keypad, Crate’s digital DX-212 looks like a Sixties vision of the future. The knobs (Master, volume, gain, bass, mid, treble. Channel level, effects adjust, reverb level, and reverb depth) are arranged as on any amp. In addition, the amp has one rotary knob for the 16 different amp models and another for the digital effects. The Star Trek meets mood ring keypad on the right lets you choose from the 10 factory presets, set tap tempos for time based effects and bypass the presets altogether. Simply tweaking the appropriate knob lets you instantly alter that particular preset parameter, so creating custom settings is a breeze.

The back panel has a speaker-compensated stereo headphone output that can double as a stereo direct output for recording. Inserting a jack here automatically disconnects the speakers. Also included are stereo line out and line in jacks for an effect loop or connection to an external amp. MIDI implementation and foot controller connections are made via MIDI in and thru/out jacks, which brings up an interesting point: the MIDI DXFC foot controller increases the number of programmable presets from 10 to 100. Call the controller an option, but with expansion capabilities like that we call it a must.

Programming the DX-212 is so simple that the well written manual is hardly ever needed. For example you could begin with one of the factory presets and play with the knobs until you found amp-clone nirvana. By pressing the desired keypad button until it flashes (about 3 seconds) you store the new data. Those factory presets, by the way, ably mirror the history of guitar rock, since Crate has rounded up most of the usual suspects in selecting their 16 amp models. In addition to the requisite Fender, Marshall, Vox, and Boogie flavors, there’s a Hiwatt DR, a couple of pedals (a Fuzz Face and a Boss AC-1 Acoustic Simulator) and most immodestly, five Crate amps and one Ampeg. (St. Louis Music Inc. Crate’s parent company also manufactures Ampeg.) Most of Crate’ models are remarkably good, emulating both the identity of the amp and the amp’s response to the guitar For example, the “Black Face” model provided bright, glassy chime and warm lows at low to medium gain settings, adding more midrange distortion as the gain was increased. Backing off the guitar’s volume a couple of notches could clean up the sound, just as it would with a real Fender.

Crate’s modeling approach tends to focus on the high frequencies for better or worse. The Fender models fared very well, as did the Boogie Dual Rectifier, the ultra clean “Crate GX-140” (think Roland Jazz Chorus) and the “Acoustic” (Boss AC-1 Pedal) settings. The two Marshall voices missed the marl, however, by overemphasizing the fizzy highs at the expense of the Harley-in-heat lows that define the Marshall sound.

Crate has chosen nine different classis effects for the DX-212 and combined some of them for a total of 16 effects settings plus global reverb. The compressor was a mighty thing, and the modulated effects were good for the most part, particularly the tremolo, vibrato and rotating speaker. The flanger was weak and the chorus was downright anemic, considering the DX-212’s stereo output. Having both delay and echo seemed repetitive, the only difference being the delay provided a single repeat while the echo created multiple regenerations. “Touch Wah” was a nice surprise, creating wicked vowelizing on distorted settings and clean popped bubble exclamations with a minimum of knob tweaks. For a singly voiced ambience, the reverb proved very versatile, creating everything from a big hall washes to tight, tile roomed slap backs, and since it’s separate from the other effects settings it can be added independently.

In addiction, the DX-212 has a noise gate permanently set into the circuit. At lower volumes and with lower gain settings, its effect was unobtrusive, even welcome. However, the greater the gain and volume, the more pronounced the circumcision at the end of the note. If you intend to lay down thick sheets of molten metal in a setting surrounded by massive drums or crowd noise, this won’t make a shred of difference, but in more critical listening situations it might prove vexing.

Crate’s DX-212 has managed to put digits modeling into a garage band budget without seriously eliminating the bells and whistles found on higher end material. If you’re looking for a broad- brush portrait of classic amp tones for live gigging or want to trick out your new home studio, the DX-212 is a good budget-conscious choice. Here this guitar amp in action on YouTube. Visit Jukebox Jake’s video to listen to it. If you already own this amplifier, please leave a comment below to let the guitar world know how you like the amplifier. Here is the owners manual for it.

I am 13 years old and play in a band. I have five foot pedals: distortion, volume, phaser, chorus and a pedal that makes one guitar sound like two. I have a gig in a […]

Bored with the guitar’s four-octave range (and that’s only if you have a 24-fret guitar)? You could succumb to the seven-string itch, but that will only increase your range by a perfect fourth (or five […]

“Lunchbox” guitar amps are all the rage, and why not? They’re portable, can drive just about anything, and are great for recording. Orange was one of the first companies to see the merits of the […]