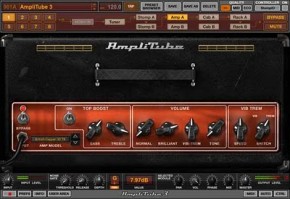 I’m really into amp sims, so people are always asking, “Which one is the best?”. And my answer is, “Well, which amp is the best?” because amp sims are as different as amps themselves. That said, IK debuted AmpliTube in 2002 as the first native amp sim, and they’ve really hone their craft over the years. If your opinion of amp sims is based on the first generation, you’ll be shocked at how much they’ve improved–and IK’s latest demonstrates just how good amp sims can sound.

If you’re not familiar with AmpliTube, it has amp and preamp models, stomp effects, “rack” effects for a more produced/recorded sound, and various signal path configurations. What doesn’t show up on a spec sheet is that to my ears, IK has nailed the “clean to breakup” transition. This isn’t easy with analog hardware, but IK pulls it off superbly–resulting in amp models with a responsive, dynamic feel that goes far beyond the “two-dimensional” vibe of older amp sims.

So what’s new?
First up: 17 new amp/preamp models on top of the 14 from AmpliTube 2 (AT2 for short). My favorite of these is the “Orange” emulation, but I also love the British Copper 30TB that could cause you to check whether there’s an amp in the room. Then again, I also like the Metal Lead T . . . bottom line: The new models are a great addition, and the realism has definitely been taken up a notch. (Some of these are re-worked models from AmpliTube Metal and AmpliTube Jimi Hendrix, thus insuring AT3’s position as IK’s flagship amp sim.)

Second, you’ll find stompbox effects–51 to AT2’s 21–and 46 cabinets, as opposed to the 16 in AT2 (including six bass cabs, and 17 rack effects instead of 11. Of course, all the previous modules are included for compatibility, but this is a major amount of New Stuff. Two rack effects, the Step Slicer and Step Filter, add synchronized effects that recall what you can do with Roger Linn’s AdrenaLinn–nice. The rotary speaker rack effect is cool, but even better, AT3 now incorporates two outstanding rotary cabinets.

Which brings up another point: AT3 isn’t only about guitars. I used the original AmpliTube on parallel drum tracks, and AT3 is even more flexible. Throw the rotating speaker on keyboards, and you’ll be highly impressed. You can think of AT3 as a cost-effective suite of effects; even if you couldn’t care less about the amps (which would be a shame), the stompboxes and rack effects are a useful addition to any host program. IK must agree because the signal path through the system is now stereo–perfect for drums, keyboards, etc.

Get a room!
Interestingly, IK has really focused on the relationship of mics and room to the final sound. When you go to the cabinet section, there are two virtual mics. You can choose from 15 different mic types for each one, move them closer or farther back from the speaker, left or right, mix the blend, adjust overall stereo separation, and throw mics out of phase. There are five room types plus controls for room width, pan, and level. You can even change the cabinet size; the default sizes work best when used alone, but in a stack, changing the size can create a novel, layered sound.

The end result is that you can capture not just eh sound of an amp, but the sound of a miked amp in a room. The extra options increase realism more than I would have expected, and having used many of the mics being emulated, it’s clear someone did their homework. The increase in virtual miking flexibility may not seem as sexy as new models and effects, but what it contributes to the overall sound is huge.

Tweaks
IK has taken advantage of the update to include some welcome teaks. For example, you can still go into Preferences to trade off several sound quality settings versus CPU power options, but AT3 now has a simplified set of “Quality” buttons (Hi, Mid, and Eco) that are basically preference presets. And while the reverbs may look the same, their underlying engine is now impulse-based instead of synthesized, giving more realistic effects. You’ll also find a slightly more readable interface.

Both stomp and rack effects are now drag-and-drop, making it much easier to change the order of effects, and tying parameters via MIDI to foot pedals and the like is greatly simplified–just right-click on a control, tell it to “learn,” then move the hardware controller you want to use. Simple. And while you can still use the previous style of preset selection, now there’s a preset browser where you can search on names, descriptions, sound character, instrument, and the like. Note that the descriptions field is great for entering a bunch of keywords.

Have it your way: standalone or plug-in
As a plug-in, IK works with VST, AU, and RTAS formats on Windows or Mac. But it also works in standalone mode, making it an excellent choice for those who use amp sims live. One difference compared to the plug-in is that the standalone version offers a four-track recorder for capturing ideas that can then be exported as a WAV, AIF, or CAF file at your choice of resolutions. There’s also time- and pitch-stretching–ideal for slowing down solos and practicing–and looping.

Ultimately it’s all about the sound, and those who loved the sound of AT2 will be glad to hear that AT3 takes the quality up one more level–warmer, fuller, and more detailed. It’s not just a subtle, but major step forward that raises the amp sim bar.

Amp sims have gotten a bad rap from some people who don’t realize they need to adjust their guitar levels or pickups to match the presets, or who overload the input and create nasty digital distortion that masks the “good” distortion the sims creates… or for that matter, feel that emulation hasn’t improved since the first generation. But if you still believe amp sims can’t do a credible job of creating great tone, I won’t argue with you: Just listen to AT3, as it makes the argument for me–and very convincingly. Check for prices.