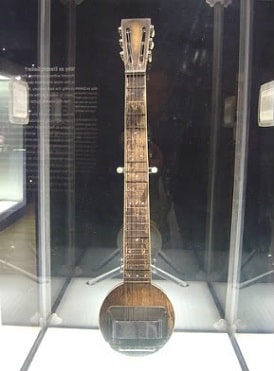 Make it louder!, said George Beauchamp to John Dopyera. These three little words led to the birth of the electric guitar, and instrument that would go on to rock the world and become one of the signature sounds of the 20th century.

It was 1925, and Beauchamp (pronounced “Beech-um”), a dapper, hard-drinking, heavy-gambling vaudeville entertainer, had brought his guitar into Dopyera’s Southern California repair shop, complaining that it couldn’t be heard above his audience. Dopyera belonged to a family of skilled luthiers who had immigrated from Czechoslovakia in the early years of the century. He had devised a wood-bodied guitar into which he inserted a system of metal resonators to increase its volume. That’s why Beauchamp had sought him out. The two men soon went into partnership and started National Guitars, a company that later mutated into the Dobro Corporation. Dorbro (from Dopyera brothers) eventually became the generic for the type of steel resonator guitar Dopyera invented.

George Beauchamp was certainly not the only guitarist yelling “make it louder!” back there in the Roaring Twenties. As dance bands got bigger and more raucous, guitarists—at the time a key element of rhythm sections—hand an increasingly hard time being heard. And by the end of the Twenties, Beauchamp had hit on a means far more effective than resonators to make his guitar heard above the gin-house din: Electricity! Since the turn of the century, electricity had been making all aspects of life brighter, faster—more modern. Why not electrify the guitar as well?

That’s just what Beauchamp did. By this point he’d left National and joined forces with another European immigrant, Adolph Rickenbacker, whose friends just called him Rick. (The history books do not record what his arch rivals the Dopyera brothers called him.) Beauchamp, Rickenbacker and a third man, Paul Barth, developed what is generally acknowledged to be one of the first—if not the’ first—commercially produced electric guitars: the A-25 “Frying Pan.”

Introduced in 1932, the Frying Pan hardly looked like the invention that would enable the birth of rock and roll some 20 years down the road. (The first prototype can still be seen today in the Rickenbacker museum at the company’s corporate headquarters, in Santa Ana, California.) Resembling an underdeveloped banjo more than anything else, the guitar was designed as a lap steel. The reason for this was purely a matter of marketing: Hawaiian music and Western cowboy songs made up a significant portion of the popular guitar music heard in the Thirties. Tin Pan Alley songwriters were cranking out “island” numbers like “Ukulele Lady,” and George Beauchamp himself was known to don a lei and perform Hawaiian style on stage. In this way, lap steels came to play a significant roll in the early development of the electric guitar. But by 1935 Rickenbacker had added an electric Spanish, or ES, model (what we end-of-the-century rockers think of as a “normal” guitar). All of these early Rickenbacker electrics sported the horseshoe magnet pickup that Beauchamp had devised. The pickup’s horseshoe “arms” encircled the strings, creating a powerful magnetic field for transforming strings vibrations into electrical signals.

Beauchamp wasn’t the only guy tinkering with guitars and electricity in the Thirties. Lloyd Loar was already renowned for his designed work at Gibson during the Twenties (which included the legendary L-5 archtop) when he started Vivi-Tone in the early Thirties, and subsequently designed a few electric guitars for the company. Meanwhile, the Dobro Corporation had its own electric guitar, designed by Victor Smith, and Paul Bigsby (the future wang-bar innovator) created an early electric guitar form country picker Merle Travis. Like so many great ideas, the electric guitar was just “in the air” at that particular juncture in history, fated to be invented, if not by one person, then by another.

More to come on the “History of the Guitar” G-M

Electric guitar pickups are a touchy and subjective topic. Most long-time players have gone through a number of different types before they work out what is the best sound for them. Sometimes they will even […]

Fernandes Guitars is a Japanese guitar manufacture founded in 1969. They derived from building flamenco guitars, as the company grew, they eventually expanded products to include: additional acoustic guitars, electric guitars, bass guitars, amplifiers, and […]