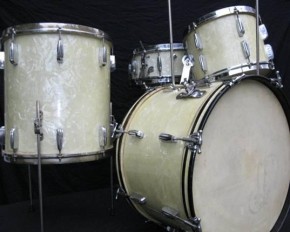 I now understand what writers go through when trying to assemble an accurate description of the subject at hand. Whether it’s a painting, a great moment in sports, a catchy new song or the newest Ford pickup truck, the definitions of such potential pop icons can become daunting. This has been my conundrum in coming to terms with the Four-Piece drum set.

Where do I start? It’s not that the four-Piece is really that big of a deal…right? I mean how hard it can be to describe a set of drums. The earliest drum “contraptions” were born out of space concerns and economic necessity. The vaudevillians had everything but the kitchen sink, and some had that too! When the “Four” came into favor it was just four tubs and some cymbals. Wasn’t it? Holy crap is there more to it.

In the 1930’s and 40’s Jazz was the rage! The stylistic soloing and fast tempos of the swing era had a tight hold on the ear of young America and the kids were dancing in the streets. Being successful in this new age of Jazz meant looking the part as well as playing the part. As young drummers began stepping up to the plate in various clubs around the country, their instruments began to reflect the streamlined refined style of the time. Gone were the myriad of bird calls, whistles, bells and blocks; the sound effects used by the theatre and radio pros a few years before. In their place was a finely honed instrument outfitted with two tunable toms, larger cymbals for “riding” the time, thinner cymbals for “crashing” accents and a new foot-operated device that turned cymbals into “hi-hats” (c1936). This was the setup that over time would prove to be one of the most iconic images of pop culture. The universal symbol of drumming known as The Four-Piece drum set was born.

History has witnessed significant artistry expressed on the Four-Piece contraption for nearly eighty years. Its simplicity is in fact, quite deceptive. Many drummers who are used to playing bigger kits find the compact four-Piece difficult to navigate at first. However, once they relax into its Lay-Z-Boy-like comfort, they find they’ve unlocked a world of rhythmic possibilities. Unlike large kits with multiple toms, that can limit drummers to rather basic and monotonous 16th note-based runs, the Four-Piece pushes the drummer to be more rhythmic, more syncopated, more creative. Take a listen to the Four-Piece’s early masters; Big Sid Catlett, Papa Jo Jones, Chick Webb, Buddy Rich, Joe Morello and Max Roach,. Then compare them to Pop-Rock heavyweights like Ringo Starr, Charlie Watts, Mitch Mitchell and John Bonham. It’s amazing to think that all of these drummers were essentially playing the same set up. It goes deeper than that! Most of the great Motown hits were recorded with a Four-Piece house kit. The JB’s “Funky Drummers” Jabo Starks and Clyde Stubblefield were both at the helm of Four-Piece kits, as were modern jazz legends Jimmy Cobb, Elvin Jones, Jack DeJohnette and Tony Williams. Today Drummers like Stanton Moore, Travis Barker, Bill Stewart and the great Peter Erskine continue to steer the Four-Piece into yet unexplored territory. 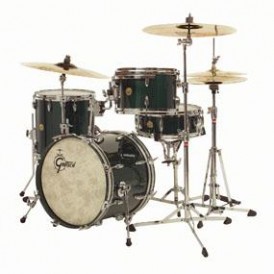 Let’s take a closer look at The Four-Piece. The tom-tom and cymbal placement are what really make the Four-Piece such a recognizable contraption. These sets were commonly sold with the smaller tom being a 9”x13” mounted to the bass drum, in front of the snare drum, and a 16”x16” floor-tom to the drummer’s side. Crash cymbals were hung high to each side with the ride cymbal falling comfortably under the drummers leading hand above the bass drum. There are today, of course, many variances in drum and cymbal size but the basic shape of the kit remains. John Bonham played larger drums than Max Roach or Elvin Jones but all three played essentially the same “shape” of set up.

A major contributor to this set up was the tunable tom-tom. Tom-toms came late to the early drum sets almost as an after thought. They were used as a way to imitate the early Afro-Cuban inspired rhythms of the dance age; the earliest versions were imported from China and were un-tunable with tacked-on heads and were somewhat limited in what could really be “said” on them. The Slingerland drum company, at the request of Gene Krupa, made the first fully (top and bottom heads) tunable tom-toms, thus allowing the entire set to be tuned despite humid or dry climate conditions. Krupa took the tom-tom to the front lines on the Benny Goodman hit Sing, Sing, Sing! this featured a deeply tuned floor-tom driving the band, and a nation of young swing kids to crazy heights! 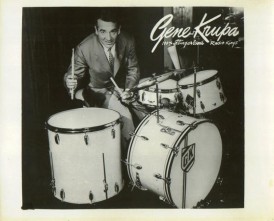 Another advance in the set’s final design was the creation of a large cymbal for “riding” out the “time”. Previously time playing had been relegated to smaller cymbals, or wood-blocks; with some of the earliest time keeping done on the snare drum itself in the form of a tight buzz-tap stroke! The larger “Ride” cymbals gave the set a sustaining shimmer that helped blend the rhythm section with the melodic instruments of the soloists. Early rides were only 16” or 18” in diameter. Later versions would push the size limits, growing to 26” with the most common sizes becoming 20” and 22”. Now all the elements were in place.

The Four-Piece drum kit it seems is here to stay. Its iconic familiar shape, paves the way for the shape of great things to come. Since its earliest incarnation, it has provided the building blocks for countless radio hits and live stage spectacles. It has been witness to history at Carnegie Hall, The Apollo, The Savoy, Woodstock, Altamont, Shea Stadium, Lollapalooza, Ozz-fest, and even the local neighborhood bar. It has been documented on more recorded works than one could count, and still it continues to be the comfortable favorite of many of our most revered drummers, as well as those we have yet to discover. The Four-Piece’s story is still being told and new chapters are being written every day by a new breed of drummers who have chosen it for their vehicle of expression. What will you have to say?

Far too often I’m told buy a band leader or record producer, to play something “kinda funky”. Funky is, of course, defined in many different ways depending on who you talk to. If you’re talking […]

If there is one thing we all have in common as drummers, it’s that we all need a good drum mat to place our percussive palaces upon. Whether you go for hardware-store basic, Carpet store […]

Choosing monitor speakers is probably the most subjective part of equipping a recording studio. Specs and features inform you of the manufacture’s intent, but only your own ears can tell you how a given set […]