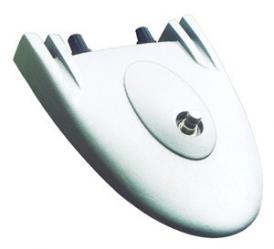 Roger Mayer is known as the guy who built pedals for Jimi Hendrix, and Octavia is the creation perhaps best associated with his name. There’s a gleeful chaos to the Octavia’s circuit that no well adjusted microchip can match. You can hear it prominently on Hendrix’s “Purple Haze” solo—a nasal, metallic tone that adds a harmonic one octave above the note played.

The Octavia is housed in a rocket shaped pedal of heavy cast metal. There are no identifying graphics or LED status light on the top surface, but a look at the bottom plate identifies the input and output jacks and volume and drive controls. Inside, the circuit board is small, simple and structurally isolated from the foot switch, jacks, and controls.

Playing the Octavia with a Strat through the Marshall, it was easy enough to call up the classic “Purple Haze” sound. But limiting yourself to this one trick would be a waste of the Octavia’s endowments. This pedal revels in the sound of a circuit in agony. With the drive maxed out, the Octavia approximates the cheesiest and most sought after fuzz boxes of the 60s, with a static ridden snarl that transforms wide, consonant intervals into a bottom heavy power chords and closer voicings into raspy maladjusted power tools. Decreasing the drive brings out the Octavia’s penchant for the dynamic exaggeration, a strong pick attack produces manic crackling blats while a softer touch elicits a muted mumble, all while resonating with the metallic clang of ring modulation.

I hesitate to criticize a pedal so gleefully psychotic, but while Mayer’s sci-fi housing will survive the war of the worlds, the flexible bottom plate, with its delicately threaded screws was rather lightweight. The addition of an LED would seem appropriate but then again if you can’t tell when this pedal is on seek counseling immediately.

The End Line
The Octavia’s classic harmonic distortion guarantees a hallucinatory ride. So hang on!