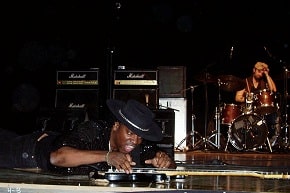 Blues You Can Use From the Desert Southwest – Every once in a while, you run across something that is just astonishing, something that you’d never expect to find. For this writer, that “something” is bluesman Carvin Jones, who has long been the pride of Phoenix, Arizona and has over time become a familiar and welcome face on the European concert circuit.

Carvin moved from his hometown of Lufkin, Texas to Phoenix in the early 1990s. He may have told Phoenix New Times that he just needed a change of scenery, but in an exclusive interview with Lunch magazine, he admitted that it was a breakup with his girlfriend (and his desire not to be on her yo-yo string) that sent him and his Stratocaster to the desert Southwest.

Carvin was recommended to me by a veteran bass player named John Gibson when I asked him what sort of music scene there was to be had in the Valley of the Sun. He asked me what I was into; the answer was (and is) blues. He bluntly asked, “Do you like that Stevie Ray shit?” I cocked my head at him, the way a dog does when it tries to look through a chain-link fence.

“You know,” John said. “That Jimi Hendrix shit. You like that?”

I was flummoxed. Surely, I replied, you aren’t telling me that there’s someone in this town that can play like Jimi Hendrix or Stevie Ray Vaughn (suppressing the instinctive urge to chastise him for referring to their music as “shit”). He said yes, there was such a player, Carvin Jones. He told me to check him out at a little dive bar called Joe’s Grotto on any Wednesday night – that was just the bar closest to John’s house. Carvin plays seven nights a week. The following Wednesday, I did.

Carvin was there, setting up his amps, a pair of Fender tweeds with three 10″ speakers apiece. When he was satisfied that everything was ready, he went around to the customers (the place was packed, on a Wednesday, which seemed odd) to ask if anyone had any requests. As a matter of fact, I did, one that I thought would make or break someone who would be so bold as to play the music of the Gods.

“Killing floor,” was all I said – a staple of Jimi Hendrix‘s live act, whose rendition has been described by Eric Clapton as being “technically impossible“.

With no hesitation, he responded, “What version?”

I went for the throat: “Monterrey Pop.” Carvin nodded and went on to the next table, soliciting songs as his rhythm section got their act together.

He opened with it. I could not get my jaw to close for the rest of the night. Before he was done, he would tear apart Texas Flood as well, and Purple Haze, which he ended by placing his Strat face down and booting it across the stage floor into the wall, where it ended the song in perfect time.

Growing up, Carvin’s influences were rooted in classic blues. His grandfather listened to records by B.B. King, Albert King and Freddy King. He has no problem venturing out of his chosen genre. From Creedence and Joe Walsh to Black Sabbath and the Rolling Stones, Carvin will go anywhere that guitarists before him have gone. His own material consists of classically styled blues, but always upbeat, and always full of that timeless Strat vibe. He is a true virtuoso, playing so fast on Machine Gun that his hand becomes a blur, eliciting the same visual effect as does a hummingbird’s wing.

It’s not just that Carvin plays like the masters from which he derived his craft; he gets their tone, too. He’s also the consummate showman, with a Buddy Guy-like propensity for wandering off into the crowd during songs, leaning his back against the back of a stunned patron while ripping through his blues licks. Nobody wants to go on after watching him pave over his audience – nobody.

Over the course of the past decade, the man from Phoenix by way of Lufkin has become quite a presence in Europe. His is practically a household name in France, Germany, Italy and London. Two of his CDs are live recordings from those swings through the old country.

The one flaw in Carvin’s game is his voice, worn hoarse from playing night after night after night, a distinguishing feature at this point. It didn’t keep Guitar Magazine from ranking him in the top 50 best blues guitarists of all time, giving themodern day greats something to strive for. Anyone who has a chance to see The Carvinator, on this side of the pond or the other, will get considerably more than the price of admission. They’ll get to hear, and feel, a sound that many people of believed to be dead and gone.

The Fender American Deluxe Stratocaster is instantly comfortable with irresistible tone and playability. You won’t believe your fingers and ears. The ultimate in high-performance, these premium Fender Stratocaster models have an ultra-smooth, sweet neck with hand-rolled edges to make it play fast, smooth, and sweet. […]