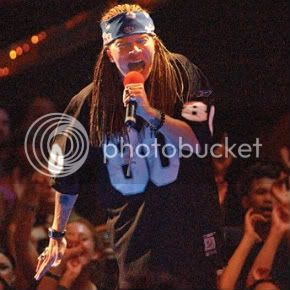 Back on June 17th 2008 a leak of nine allegedly “mastered, finished” tracks from Guns N’ Roses’ long- delayed “Chinese Democracy” spiked a renewed circle of talk about whether the Axl Rose-led band will finally release the 14-years-in-the-making “Chinese Democracy“ album.

Some solid indications are finally emerging, suggesting that the album’s release could be imminent. That’s because, according to sources, negotiations are in the progress for “Chinese Democracy” to appear as an exclusive at one of the big stores — either Wal-Mart or Best Buy.

According to another source, negotiations are also ongoing a conventional record company distribution.

Guns N’ Roses are now managed by Irving Azoff’s Front Line Management, and Azoff is a known promoter of issuing albums exclusively through retailers. He released the Eagles’ “Long Road Out of Eden” through Wal-Mart, much to the disappointment of other merchants.

Most recently, it became known that AC/DC’s next album will come out exclusively through Wal-Mart. Merchants were particularly exasperated that the deal was apparently struck with the consent of Columbia.

Gear-Vault.com will be conducting an interview with one of our favorite bands, 10 Years for the bands new album debut “Feeding the Wolves“. We are very excited to interview and share our experiences with you. […]