As a guitar instructor, I routinely deal with students trying to learn songs they want to play. After all, that’s the whole point of this thing of ours, right? The thing that I notice over and over, however, is the increasing dependence of most students on some sort of online tab website to provide the details on how a given song is played, rather than learning the song in the time-honored play-along-with-the-record ear-based method.

When I talk to students about this, they seem to feel that guitar tabs are the only way they can learn a new song, and are reluctant to use the play-along method. This causes me to worry about their development and overall musicianship, as pickers do not live by tab alone. In this spirit, I have decided to make this, my latest Fight Club piece, about this very topic in hopes of shedding some light on how and why we learn the tunes that we play and the benefits and drawbacks of each method.

First of all, let me say that there is nothing inherently evil about reading guitar tabs, online or otherwise, or standard notation, for that matter. I learned to read notes from my very first lesson in third grade and tabs a bit later and my reading skills have been very helpful in many musical situations over the years.

The problem comes when students depend entirely on guitar tabs and never develop the skills needed to interact with the music they are learning directly, rather than through someone else’s interpretation of it. You see, a tab is as good as the person who did it. In a published transcription book, the tabs are usually done by professional transcribers who have a high black belt-level grasp of music and are normally pretty close to right. 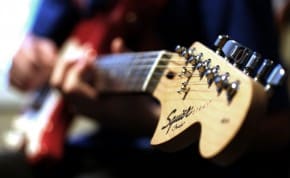 Online guitar tabs, though, are as good as the 12-year-old who did them in his bedroom and are often ragingly incorrect. Also, it’s easy to find many different tabs of the same song and to discover that they are all different from each other, with no real way to know which the correct version is. The main reason given for using them by students is (of course) “it’s easy.” Easy, however, is not what we are always looking for and, while a somewhat correct online tab may let a beginning student approximate a song quickly, those who use guitar tabs as their only way of learning are missing out on the skill development and ear training that the play-along method provides.

Playing by ear, in contrast, is often one of the hardest things for a student to learn to do, mostly because it can’t really be taught. It is a total learn-by-doing experience, and that is its whole benefit. It does, though, pay huge rewards to those that really work it and puts them on the same path that their old-school guitar heroes took. The gains made by ear playing are better knowledge of where the sounds are on the guitar, the ability to recognize and identify components of the music we hear, and the many musical discoveries made on the way to sounding things out.

These abilities and discoveries are major building blocks of a players’ individual style and cannot be gained any other way. Also, music is sound (duh!) and sound is a living, breathing thing, especially when we play live. If you skipped over the ear training portion of a musician’s development, it will be difficult for you to follow if your band deviates even slightly from the ink-and-paper script you memorized.

A player with a skilled ear can hear things change, know what they changed to, and follow them wherever they go. The downside to this way of learning is that it is more difficult and time-consuming. It requires a lot of butt-in-the-chair time to get better at it and many students are unwilling to put that time in. You know what? No guts, no glory. It’s kind of like playing football: you have to put in the time and take the hard knocks to get to where you want to be.

Ultimately, an expert musician knows and uses many different methods to learn songs, picking the right one for the job at hand. Reading and listening are both important and the only person who will tell you that one of them isn’t is someone who can’t do it.

That said, if I had to pick one to use for the rest of my musical life, it would be ear playing, hands down. Ear playing allows for direct interaction with the piece of music at hand, with no other interpreter involved, and the skills developed by doing it are worth the struggles they require to possess. After all, that’s the whole point of this thing of ours, right? Most of us who want to learn how to play guitar do it to play the songs we love. Sorry to say, but, in this Fight Club, tab just got its butt kicked.

You have just started to play guitar or you are still learning it and having a hard time learning it. Don’t worry even the guitar geniuses went through same phase once. You can achieve success […]

Easy Learn How To Play Smoke on the Water [on Guitar]

Smoke on the Water by Deep Purple has to be the easiest guitar song in the world to learn. This timeless classic rock song is as much fun to play as it is easy to […]

Top 10 Guitar riffs by Gibson.com — I would have ‘Sweet Child o’ Mine’ up further and Rush, ‘Limelight’ removed in favor of Metallica’s cover versions of Diamond Head’s ‘Am I Evil?’. Review these top […]