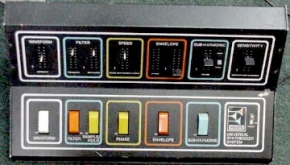 Attention. Gear-Vault Shoppers: the next time you bid on a Maestro Filter / Sampler & Hold pedal, you may find yourself up against Nigel Pulsford [former guitarist of Bush]. Be prepared—when it comes to gear, the man is one serious shopper.

“I’ve go this obsession with old Maestro pedals,” says Pulsford. “I own one of their Filter/Sample & Hold stompboxes, which I used on The Science of Things. But they must not have made a lot of them, because I’m having trouble finding a second one.” The vintage pedal, designed in the Seventies by synthesizer builder Tom Oberheim, employs two circuits familiar to most synths: a resonant filter that accentuates frequencies, and an analog sample/hold circuit that allows the user to create and play samples in real time. The box is equipped with one knob to control the filter cutoff and another to control the sample/hold rate. “It’s very unique,” says Pulsford. “There isn’t anything else quite like it.”

For the making of Science of Things, Pulsford went all out in his search for “loads of old crap!” Among his finds was a WD Orange Squeezer compressor, a small, orange-colored device that plugs directly into a guitar’s input jack. “It has just a beautiful compression,” says Pulsford, “especially with the clean tones. It was especially good for this album because I tried to play more clean guitar this time. I was bored with the overdriven sound, and I found that if you stick a clean sound on top of a big old rock tone, it really comes through. So I used the Orange Squeezer a lot.”

Pulsford also made a good use of a vintage Ibanez Auto-Filter—essentially an auto-wah—employing it extensively on “Jesus Online.” “It gives you this great, piercing tone, which can be completely horrible or completely wonderful. You just have to mess around with it a bit.”

Among his most prized finds was a small, vintage Guild amp. “It has the most amazing tremolo on it,” says Pulsford. “It’s extremely fast, and as the effect speeds up, it tends to chop the sound off a bit more drastically. I think it’s due to the classic problem of old amps working inefficiently. That’s what makes all the vintage amps great—they’ve got really old, fucked-up valves.” The effect can be heard distinctly at the intro of “Prizefighter.”

Advertisement—————————————
—————————————————————
In addition to the Guild, Pulsford used Mesa/Boogie amps and a new Bob Bradshaw-designed amp for Custom Audio. His guitars on the album were a Gibson Les Paul, a Gibson Les Paul Junior, a Fender Standard Strat with a maple body and neck and Seymour Duncan pickups. “It’s got a great, bright sound,” Pulsford says of the maple Strat. “A lot of the guitar sounds on The Science of Things are that guitar through the Bradshaw.”

Pulsford occasionally played in drop D tuning on the album, and he crated his own open C# minor tuning [low to high: C# G# C# G# C# E] for “The Disease of the Dancing Cat.” While he adds, “I want to start going back to using .011s again. I used to play them years ago, and you just get a much better sound.”

While Pulsford favors old an dworn-out effects for their unique sounds, Bush frontman and guitarist Gavin Rossdale has his own philosophy when it comes to gear: “I’m cheap,” he says. “I just go for what sounds right and feels good.”

His amps on the record include the Bob Bradshaw amp, a Fender Bassman and a Fender Tremolux. For effects, Rossdale picks a mix of vintage Electro-Harmonix and Morley pedals, and SIB Varidrive overdrive/distortion pedal, a Boxonic Expandora distortion box and Fulltone pedals. “Just funky stuff,” he says. “The funkier, the better.”

Gibson Les Paul 2010 Standard Limited Review — Gibson is equally known for their traditional guitars which are inextricably linked to song history and for spearheading the way in the high-tech guitar world, as seen […]

Here’s a list of 14 Epiphone guitar models of 2010. We compiled information for each of the 14 guitar models–from Epiphone. Are you excited to see these guitars at NAMM 2010? We are! 1959 Epiphone […]