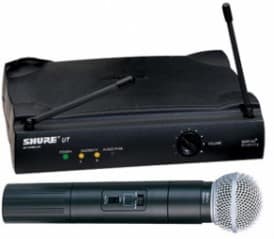 The main reason for using a wireless system is obvious: avoiding the embarrassment of being tackled by your own cable. While wireless systems have become commonplace, there are still performers who prefer the umbilical-cord safety of their real cables, citing signal degradation and interference as being the main problems with going wireless. While early systems did suffer from those Spinal Tap moments when the evening’s ballad was interrupted by the local cab firm’s radio controller, the recent generation of wireless microphone systems reviewed below have a couple of secret weapons.

The first “true diversity,” which means that the system contains two independent receivers from which it selects the stronger signal. The second innovation is the employment of the UHF (Ultra High Frequency) band, which, compared to the VHF band, is relatively uncrowded, thereby greatly reducing the chances of signal interference.

The first microphone system to enter our cable-free zone is the Samson UHF Series One. The system’s UR1 receiver is a tidy half-rack unit with two tuned, molded antennas that can be folded away for safe transportation. The uncluttered front panel contains a peak LED to warn of clipping, A/B LEDs to indicate which of the two receivers is active and a five-segment radio frequency level meter that displays the strength of the received signal. The mute (or “squelch”) control is factory pre-set to allow for the maximum range before signal drop-out, which is 300 feet under normal conditions. The unit also has balanced XLR and unbalanced ¼-inch outputs, Surface Acoustic Wave (SAW) filters that provide optimum clarity and a total of six available channels that allow the use of multiple UR1s within the same venue.

Our model was paired with Samson’s own Qmic hand-held microphone, and is also available with various popular mic capsules, including models by Shure and Electro-Voice. The Qmic includes a power switch and a battery-strength indicator. In use, the Series One system performs loud and clear, while Samson’s Phase-Lock Loop technology locked in the signal for stable transmission. The amplified tone was also consistent and realistic, with no more background noise than a conventional microphone.

Our next candidate was the Shure UT Series Vocal Artist UHF system. This package consists of the UT4 receiver and the UT2 microphone-transmitter, which is based on the industry-standard Shure SM58 mic. The UT4 has a rugged modular design that can be stacked or used as a half-space rack unit, and it provides enough available channels for eight units to be used simultaneously. This receiver offers a peak indicator and volume and squelch controls, but no signal strength meter. Shure’s MARCAD circuitry allows the receiver to use both antennas simultaneously to combine the signals for optimum quality over the 300-foot range.

The UT4 also offers XLR and ¼-inch outputs that can feed two separate devices at once. The semi-rigid antennas offer the same performance as the telescopic versions but are more durable. The hand-held UT2 mic includes power and mute switches and a battery level indicator. The system is simple to use, offering distortion- and interference-free clarity, as well as the familiar heft of an SM58.

Our third system, the Telex UR12L includes a UR12 receiver and a UT12 base, a clever device that snaps onto any metal-bodied, three-pin mic and includes mute and power switches. The UR12 receiver has the requisite pair of antennas, volume and squelch controls and XLR and ¼-inch inputs. A pair of LEDs tells you what’s happening on the airwaves: one indicates if the transmitter is on, while the other changes from orange to green when the diversity system has optimized reception. Although this system offers less visual feedback than the other two, it can operate in a 300-foot range with true diversity and can be used with up to six systems simultaneously. Employed with a Shure SM58 mic, the UT12 produced a signal that was uniformly clear, with minimal noise.

The End Line
It would be impossible to conclude that any one of these systems performed better than the others, since they all behaved themselves perfectly under test conditions. In fact, if there’s a “downside” to all three systems it’s that you can’t swing the mic over your head during the guitar solo.

Purchasing a microphone is never an easy task. It’s hard enough to crank up a guitar amp in a music store and try to evaluate the tone of an instrument, effect or amp—all the while […]

A few decades ago, Electro-Voice set the audio industry on its ear when they introduced the NeoDymium (N/DYM) line of durable and affordable dynamic microphones, which boast response and performance characteristics comparable to costly condenser […]

When my band rehearses, the cymbals are always leaking into the vocal microphones. How can we stop this from happening? Pete xxxx@gmail.com Answer Ah, Cymbals—the bane of many a sound engineer’s existence. From rehearsal rooms […]