Table of Contents show
1 Difference Between Playing Acoustic and Electric Guitar
2 Acoustic vs Electric Guitar Sound
3 Beautiful Acoustic Guitars – Comes With a Price
3.1 At the end of the day, do you go Electric over an Acoustic?

Electric guitars, for all of their versatility and technology (never mind popularity), owe their existence and success to just one thing: The acoustic guitar. Somewhere in between those two types of the same instrument lies an evolutionary process of Darwinian proportions. The same can be said of precious few other instruments or devices of any sort; there was no “acoustic” ancestor to the automobile (unless you count horses), for example. And while the slide rule is without a doubt the analog precursor to the computer, almost nobody even knows how to use one anymore, or much yearns for its return to active duty.

Acoustic guitars, however, are alive and well and always will be (unless and until humans evolve into creatures that have flippers instead of hands – it could happen). Anyone who knows the fretboard would certainly be able to play either electric or acoustic and even though most players keep and enjoy both, there are definitely camps in which these different breeds of cat – acoustic players and electric players – harbor themselves.

The distinctions between the sub-species are vast. Electric guitar mavens have so much more control in their hands, so many parts that can be swapped out to provide that pearly tone of great price. The selections are obviously endless, and through the genius of parallel wiring, that tone can be divvied up into potentially dozens of combinations. From pickups to capacitors, from pedals to whammy bars, from Pignoses to Mesa Boogies, the full range of the electric guitar as a sound medium is akin to the universe itself – infinite and expanding all the time. But is this enough to chose an electric guitar over an acoustic guitar? 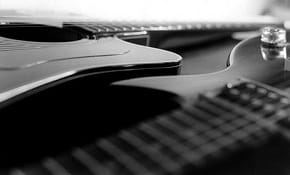 Acoustic guitars have one sound. You either like it or you don’t. It can be rich or poor. It can be fat or thin. It may be able to thump like a mortar, it may ring like a church bell, it may snarl like a cat, and for sure it can sing like a Whippoorwill, but it cannot be altered. It can be somewhat re-directed by changing the strings and tuning, but not enough to the metamorphosis that comes pouring out of the soundhole. What’s more, by the time they get to their owners, acoustic guitars are finished works of art. Almost nobody would ever consider pulling out the toolbox and jacking around with the removable parts on their Collings or Larrivee. Nobody would strip the finish from their Brazilian Rosewood acoustic, period.

Obsessive-electric personalities are like mad plastic surgeons, or Doctors Frankenstein, who are willing (because they are able) to put together their perfect lover one organ at a time, creating their masterpiece as they see fit. The purists who seek out the finest acoustic guitars aren’t looking for that at all. They’re after a true beauty in the first place, which they will love and protect and care for throughout their lifetimes.

With much respect and admiration for both kinds of guitar and those who excel at playing them, it all boils down to one question: What can you do with an amazingly beautiful, stunningly expensive acoustic guitar? Drag it out to the campfire? Stuff a pickup in the soundhole and ram it through an amp by way of a distortion pedal? Pass it around at the ol’ coffeehouse on open-mic night? Hell, no…

They get treated like Rembrandts, exposed to about as much air and light as the Dead Sea Scrolls. Only very deserving persons are ever allowed to even look at it.

Sorry, but that’s the definition of neglect. That’s like marrying a Perfect Ten (or, rather, buying one) and then walling her up in your basement, like something out of an Anthony Hopkins horror movie. You never take her dancing, she never gets to meet any other people – she never even gets to enjoy the company of other trophy wives. You only put your hands on her when you’re in the mood – usually late at night, after you’ve had a few drinks. It’s sad. But she never ages, so…

On the other hand, even the priciest of electric guitars get taken out for a night on the town every so often. Other people get to look them over, drool on them, paw them up, push their buttons, make them scream. Their owners don’t have any problem with that. So those guitars get shown off to the world whether the show is at Carnegie Hall or Club Seal Beach. That’s the real difference: The electric guitarist gets to enjoy his or her “investment”. Acoustic guitar owners have more hands-on action with their stock portfolios than they do with the gorgeous hostages they keep in their closets.

The happiest acoustic guitars are the cheap ones, the ones that get to sing, the ones that are not treated like Hope Diamonds but rather like old friends. They have names like Yamaha, Washburn, and Dean. They show up at your house in a cardboard box. They’re the ones that people love to take camping, that doesn’t mind knocking around in the backseat of your car. The ones that are just as happy plugged in as not.

Your neighbor with the Taylor stuffed in its velvet-lined coffin may not be jealous of your round-backed Ovation Applause, which spends its days and nights leaning lazily against the arm of your couch, the one with the beer stain on the headstock (under the strings where you couldn’t quite get to it with the family Sham-Wow). But do you know who is jealous?

Miss Taylor. Trapped in her velvet-lined coffin. Dreaming of – not dreading – the moment when she might actually see the light of day. She can’t wait to speak her mind.

On the flip side of the coin, we posted an article “Why Acoustic Guitar is Best For Learning How To Play” and why you should choose acoustic if you’re a bigginer. Click the link to find out!

At the end of the day, do you go Electric over an Acoustic?

Adrian Smith and Dave Murray developed the trademark Iron Maiden sound by combining their lead guitars to make dual solos. Smith left the band and was replaced by Janick Gers, but when Adrian […]

The Les Paul Studio Swirl is a stunning new addition to the popular Studio series, which has been bringing full-fledged Les Paul performance and tone to hard-working musicians since its introduction in 1983. These guitars […]

One amplifier that is highly thought of in the rock guitar community is the Mesa Boogie Dual Recto. Despite its high price tag, many guitarists swear by this amp. The Main Features Tube amps are […]