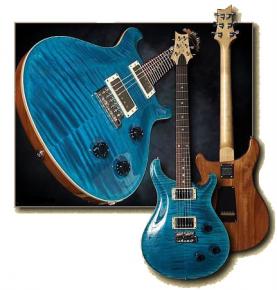 PRS presented the CE line in 1988 as a high-quality, yet, less expensive bolt-on alternative from their pricier set-neck guitar models. PRS have gained quite a following fan base in the past 20+ years for their familiar feel and superior driving tone as well as for their competitive price point. This new CE’s inclusion of a solid alder body is an especially established match for the maple neck. Alder’s airy and loud sparkling tone gives the 24-fret alder CE excellent clarity and profuse bite.

>Guitar players who know their woods may expect to hear something similar to a Strat’s acoustic tone from the PRS CE Alder. But it doesn’t sound more like a Strat than a mahogany-with-maple-top PRS sounds like a Les Paul. It creates a solid innovative tone that is aggressive in the highs and quick to respond to pick-attack, which help the Alder CE scream out leads and gleam brilliantly through clean amps. At the same time, the midrange is quite definitive and the lows are amazingly thick, as opposed to the scooped mids found in so many guitars that share this alder wood compliment. The CE Alder is more fiery than sweet and seems suitable for any style of music. Rotating the five-way selector switch through single-coil and humbucker options, I discovered everything from snappy vintage tones to furious extremes.

The CE Alder is ready to satisfy another whole new generation of PRS guitar enthusiasts who prefer the extra spiciness of a bolt-on neck and the recognizably roomy highs of an alder-body guitar. http://www.prsguitars.com/

Ask people who have owned 24-track, two-inch recording studios what they think of ADATs, and they’re likely to become extremely perturbed. Not because they’re offended by the notion that digital technology could ever sound as “warm” and “punchy” as analog equipment, not because they refuse to take any recording medium that uses $10 hi-grade video tapes instead of bulky $150 reels seriously, […]

AMT DistMachine – With four banks of four programmable patches, the Dist Machine analogue distortion pedal gives you up to 16 overdrive and distortion sounds at your command. That’s a lot of versatility n such a tiny box, but there’s no compromise in tone. […]

Taylor Guitars has been successfully producing its Baby Taylor model for almost 15 years, so it’s safe to say that it’s an unqualified success. But the folks at Taylor just can’t leave well enough alone, and so when they approached the idea of re-imagining a smaller guitar, they kept the twin pillars of the Baby’s winning architecture in mind: portability and great sound. Gear-Vault Guitar Reviews […]