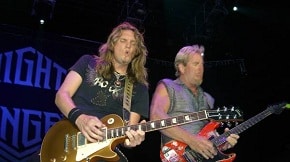 Many other guitarists have tried to emulate Angus Young’s distinctive guitar tone and fail. Night Ranger’s rhythm guitarist, Brad Gillis, stated in an interview conducted by Noisecreep.com if he had any reservations about taking on such a feat.

“We didn’t mess with the formula and instead kept things pretty straight-forward on the guitar end,” […] “The only thing I changed up was during my solo where I added some whammy bar flair to it.”

Night Ranger’s bassist/vocalist Jack Bladesalso had his work cut out for him to sing AC/DC’s former frontman, Bon Scott, vocal parts on ‘Dirty Deeds Done Dirt Cheap.’ Not only did Bladesalso rise to the occasion, he garnered approval from ex-bandmate and classic rock legend Ted Nugent.

was actually in the studio with us. Jack and Ted both played in Damn Yankees together and Night Ranger covers a song of theirs called ‘Coming of Age’ on this new album. So anyway, Jack asks Ted if he wanted to lay down some guitar on the AC/DC cover and he went in there and knocked it out in one take. We were floored by that! It was fun adding a little bit of the Night Ranger flavor to a classic.”

Don’t tell me you love me, just check out the video below. I thoroughly enjoyed it, I think you will to!

Buckcherry Interview — Ben Bojanich sits down with Keith Nelson, guitarist of Buckcherry for a face-to-face interview.   Read the transcripts below: How would you define Buckcherry’s sound? Keith: I think we’re just a rock […]