Table of Contents show
1 Nashville Flood – Musicians’ Hall of Fame Instruments Destroyed
2 When the Levee Breaks: Musical Instruments Lost in the Flood
3 Gibson Guitars Bank On Nashville Flood Tragedy
3.1 So the question really is: Is it right for Gibson to collect a profit on these guitars?
3.2 Gibson Anniversary Flood Les Paul Studio Electric Guitar

(As the tragedy unfolded)

Nashville, TN, is Music City USA and is home to more great players and gear than possible any single place on Earth. With the 100-year flood that hit the Nashville area, many of our brother and sister musicians in town are feeling the disaster in ways that would be worst-case scenario for us and certainly must be for them. There are reports of damage to the Country Music Hall of Fame and the Grand Ol’ Opry House, which are devastating to any fan of country music, but, for all us pickers and gear junkies, perhaps one of the most distressing losses in this whole event is the flooding of Soundcheck Nashville. 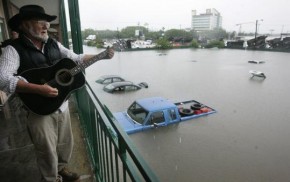 Soundcheck is basically the one-stop rehearsal, tour prep, storage, cartage, and rental shop for the Nashville music community. That means that pretty much everyone you’ve ever heard of stores their gear there and uses the Soundcheck folks to move it around for them. All that stuff is now underwater, along with all of their rental gear. Police are not allowing access to the building and won’t until the water recedes, so no one really knows the extent of the damage, yet.

It is hard to imagine the amount of gear that is soaking in Cumberland River water as of this writing. There have been some postings on other guitar forums of some of the losses, including Brad Paisley’s touring rig and of bassist Keith Horne (Trisha Yearwood, Waylon, Easton Corbin) who estimated that 40 of his basses were at Soundcheck, along with many other items. No flood of this nature is ever a good thing, but this hits most of us pretty close to home.

We here at Gear-Vault send our thoughts and prayers to our Nashville kin and wish them and the city a speedy recovery. If your guitars and amps are high and dry today, you are one of the lucky ones, so have an attitude of gratitude; many in our community are not so fortunate. Anyone interested in staying updated on the situation can follow the flood blog on the Soundcheck website, www.soundchecknashville.com. 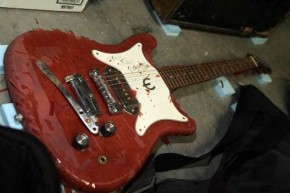 There are many sad stories coming out of Nashville this week, as people begin to clean up and rebuild after last weeks’ catastrophic flooding that saw the destruction of many lives, homes, businesses, and musical instruments. Many of the instruments were at a facility called Soundcheck, which provided rehearsal space, storage, and cartage to many of the area’s musicians. Also stored at Soundcheck were instruments that were part of the Musicians Hall Of Fame.

The MHOF is run by Joe Chambers, a long-time part of the Nashville community. Chambers lost his building to an eminent domain ruling earlier this year and put his collection of instruments, which includes guitars played by Jimi Hendrix, Pete Townshend, and Johnny Cash, among others, in storage at Soundcheck while he looked for a new home for the Hall. Then the rains came and we all know what happened after that. Watch the video below if you dare, but it is not for the faint of heart.

The loss of all this musical history at once is stunning and will take a long time for the musicians of Nashville to recover from. All of us who are having a better month than our Music City brothers and sisters should remember how lucky we are and should give what we can to help the effort to get things back to normal. Visit www.unitedwaynashville.org to find out how to become part of the solution.

When the Levee Breaks: Musical Instruments Lost in the Flood 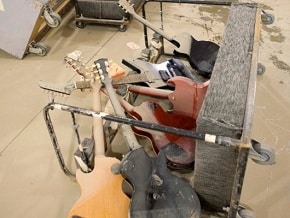 As the Red River in Fargo, North Dakota, makes its annual run beyond its banks, musicians of all stripes may want to take a few quiet moments to ponder the greatest loss of priceless and historic guitars – when Nashville’s finest instruments were lost in the Nashville Flood. For the good people of Music City, the memories of those terrible days in May 2010 are still fresh in their minds, and without a doubt, many people suffered far greater losses than that of a musical instrument. In the wide circle of guitar mavens, though, Nashville represents a watery, silent grave for instruments that once channeled the sounds of some of the greatest players the world has ever known.

Soundcheck Nashville, described as a “cartage facility“, was a warehouse of sorts where professional musicians – among them Vince Gill, Keith Urban, and Brad Paisley – stored their gear. It must have made perfect sense for them since Nashville is not only a central hub (geographically speaking) but the location of so many performances. Paisley lost all of his stage equipment as well as his instruments. Urban had to borrow a guitar to perform at a telethon to raise relief funds for the flood victims.

The Musicians Hall of Fame, which had barely been open a year at the time of the disaster, also used the 160,000 square-foot Soundcheck Nashville as a storage facility. When the floodwaters of last spring rolled through Nashville, instruments that were once played by Johnny Cash, Pete Townshend and Jimi Hendrix were forever hushed under some nine feet of water. Also destroyed was the bass guitar that was used on Hank Williams, Sr.’s last album, the bass that you hear in the song, “Your Cheatin’ Heart“.

It was not the first such tragic occurrence to hit the world of music. In 2001, Tropical Storm Allison raged through southeastern Texas, resulting in 90 flash-floods whose warnings gave an average of 40 minutes’ worth of lead-time. The historic theater district of Houston was especially hard-hit, with floodwaters claiming millions of dollars in costumes, instruments and sheet music.

This sort of tragedy is hardly unique to American players. The same situation befell Australia last year, and again, charitable organizations stepped up to the fund-raising plate in order to make whole those who lost their gear to the indiscriminate wrath of God when both floods and wildfires ravaged wide swaths of the country. 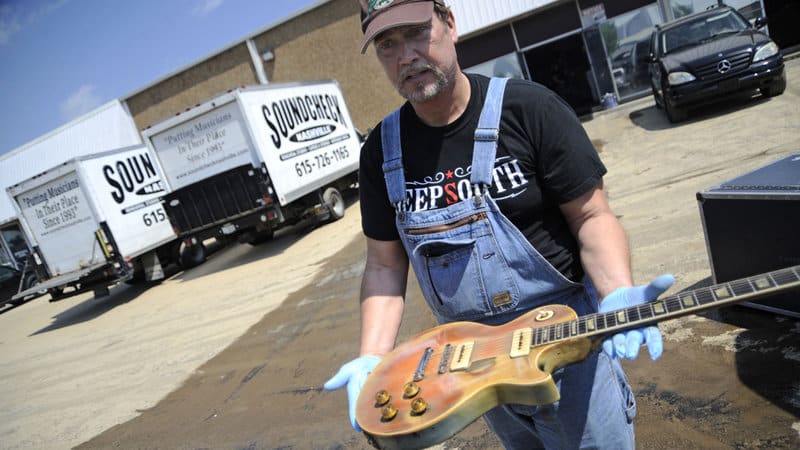 Ironically enough, after Hurricane Katrina wiped out the fortunes (and collections) of so many musicians in New Orleans, a Hendrix-owned Stratocaster was auctioned off for nearly half a million dollars. In the same auction, a guitar owned by U2’s Dave “The Edge” Evans sold for over $200,000, with all of the proceeds going to purchase replacement instruments for those who lost instruments to the worst natural disaster in the United States has ever suffered.

Nashville, though, remains the low point for many in the music industry. Never mind the checks that were surely cut by insurance companies. Guitars that are part of music history are, simply put, irreplaceable. Still, rock-and-roll icon John Fogerty (who lost several of his guitars) managed to put it in perspective, telling Reuters, “Trust me, I love guitars and it was kind of sad to say goodbye to them. But losing a guitar is really nothing compared to losing a song, or a bunch of songs, or your life savings that was earned by those songs.” He speaks from experience.

In places like Fargo, where flooding is a near-annual event, the citizenry is usually able to anticipate the rising waters. There is plenty of time for valuable treasures of all kinds to be moved to high ground. In the Nashville floods of 2010, everyone was caught by surprise. When the levee breaks, you have no place to go.

Gibson Guitars create a memorial Anniversary Flood Les Paul Studio guitar. Gibson says it’s to commemorate the Nashville Flood of May 2010… But is the real motive behind it greed? 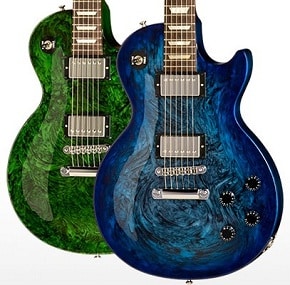 Though the Nashville flood is long behind us on the calendar, for many of us it is still fresh in our minds and hearts. The damage is done, the cleanup is all but finished, and things are back to where they should be, for the most part. Hell, Gibson is still rockin’ and rollin’ just as hard as they ever were.

As you may or may not remember, Gibson’s Nashville plant was hit especially hard in the flood, laying waste to every guitar they had, including some hall-of-fame guitars.

So now that the newsreel has halted on this subject, and all the speculation has come to a close, we are left to commemorate and honor the lives and careers (not to mention the guitars) ruined in the flood.

Gibson’s method in doing this, however, has come under fire and close scrutiny, as they chose to release the Gibson Anniversary Flood Les Paul Studio, available at Musicians Friend for $1,549.99. Many voices have called greed, with Gibson profiting on the guitar birthed from a national disaster.

When the floodwaters reached the Gibson plant, several drums of lacquer spilled on the floor. When the waters receded, an oddly attractive “swirl” pattern was left in its wake. Soon after, the Anniversary Les Paul Studio guitar was born. This new ax features a finish with the same pattern of the aforementioned lacquer incident.

So the question really is: Is it right for Gibson to collect a profit on these guitars?

I say yes. In the aftermath of the flood, Gibson has extended every hand to help those affected by the flood.  Using the reach of the Gibson Foundation, a special program solely for flood relief was created.

The most popular of Gibson’s efforts was a “bank” idea, that created several donation banks, made from actual Gibson guitar cases, and involved placing them in popular and landmark locations in Nashville to help fund relief,  all which took place from early may to early June. Another relief support was offered through a sponsored event titled Night Out for Nashville – An Evening for Music City Flood Relief.

These are just a few of Gibson’s actions to aid the people of Nashville, and I say if they want to make a commemorative guitar, and make a little coin on it, that’s alright with me. After all, they were a victim here too.

It is clear that Gibson put their best foot forward in the fight for recovery, and have proven themselves to be a major player in relief support. The fact that they pulled something interesting and different out of it is purely a bonus, the way I look at it. They could have shut up and dealt with the destruction, moved on, and been the same old same old. But they didn’t. They chose to rise to the challenge and step up to the plate on this one; Well done Gibson.

For the longest time, I refused to play anything but DR’s on my electric guitar. Though, once I really began gigging out every other weekend, I began to encounter a really frustrating issue. Every two-three […]