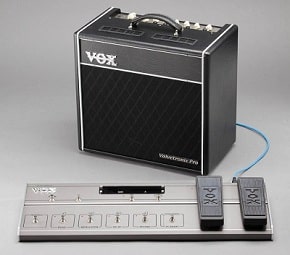 In the modern age, many amplifier companies are marketing their version of a digital amplifier may it be Peavey, Line 6 or even Fender. Vox is a bit different when it comes to the whole ballgame, and just like their previous digital endeavors, Vox ceases to disappoint with the Valvetronix Pro VTX150 Neodymium.

The Neodymium is a really cool combination of things. It’s not just a modeling amp looking to achieve sounds of 44 other amplifiers. It doesn’t just factory ship you 132 carefully crafted presets to not only imitate but GIVE you the sound heard in many classic rock to modern songs today. It does ALL of that, plus equips a tuner, 25 separate effects, 8 slots to program your sounds for your songs, and power control to adjust your wattage for the given setting. It does it all pretty much. I won’t forget that it can all be controlled from your feet as well with the VC-12SV footswitch.

It’s nice because instead of just having amp models, the guys at Vox took a step ahead and made the 132 presets to give you some extremely cool, premade sounds. Some people may frown down on this, but I’m sure there’s going to be at least one sound you’ll love in the bank. On the other hand, having separate effects will really let you do exactly what you want to do with the amp instead of fussing around with presets. It’s up to you.

The Neodymium is equipped with one EL84 vacuum tube to give you that authentic tube tone, which is always a plus. This is where the powerful “Valve Reactor” circuit comes into play. This circuit is going to pick up on every little thing you do when it comes to how you pick and play. It’s also going to bring great clarity and tonality to whatever you’re doing as well. The amp also uses an extremely powerful neodymium magnet in the speaker. This helps the amplifier to produce particularly different dynamics and nuances that the several different amp models produce much more accurately.

I’ve only ever enjoyed one digital amplifier in the past. Most of them just don’t sound like the real thing, and I’m sure the purists have a glass completely empty when considering this debate. Though with all the recent advances in technology, these amplifiers will only come close and closer to sounding like the real thing until one day, they do. Could that day be upon us? You decide!

For more information on the Vox Neoydium, visit VoxAmps.com for a whole list of amplifier song presets, models, effects, and much more.

Remember that one amp you had? Sure, you’ve finally upgraded to a full tube head or something that’s a little more professional, but there was something about that one that you’ve forgotten that you still […]

Mesa Boogie is dedicated to the tone and creativity of MESA Engineering’s famous Mark Series amplifiers. These little giant monsters, first introduced in the early 1970s, have been the ultimate choice of many major top […]