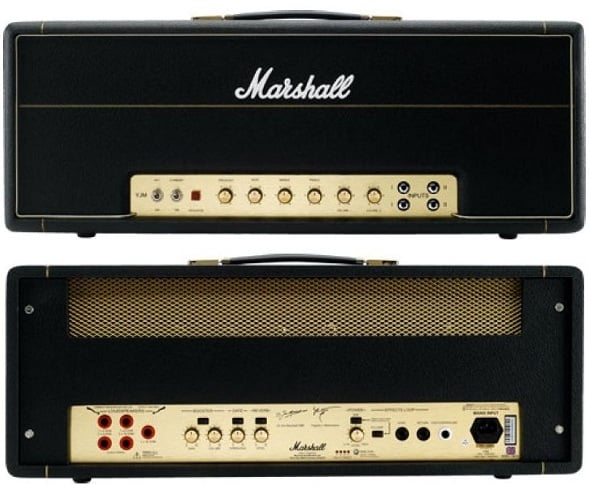 2009 – Marshall Amplification is proud to present the Signature YJM100: a 100-watt, valve head that was developed in close conjunction with the legendary Swedish six-string shredder, Yngwie Malmsteen. The YJM offers the perfect balance of vintage tone and looks alongside modern features which makes the amplifier the perfect players’ tool for “plug in and play” recording or live performance.

Malmsteen has been a Marshall devotee from the get-go so this collaboration comes as no surprise to his countless fans. “I can’t say enough about my love for the sound, feel and look of the wall of Marshall’s. Since I was 10 years old, I’ve insisted on having them behind me at all times,” the guitarist reveals. “I must have had every amp company in the world ask me to endorse them, over the years. To finally have my own signature Marshall is an honor and this amp is truly a master piece!”

Based on the power and tone of the “Holy Grail” 1959 Plexi head, the YJM100 offers the ultimate Neo-Classical amp with the following cutting edge features:

*NOTE: A four-way Footcontroller (PEDL-00046) comes supplied with the YJM100, facilitating switching of Booster, Gate, Reverb and FX Loop features. This Footcontroller has been esigned using Marshall Amplification’s patented STOMPWARE Technology, allowing the user to connect it to the amp using a standard 1/4″ guitar cable. How does Malmsteen sums up the Marshall YJM100? “Vintage look and sound, with incredible versatility and features. Remember you can’t buy just one!”

Rivera Venus series has been making big waves in the amp world, and with good reason. The Venus amps are the company’s first foray in Class A designs and they are taking things way beyond […]

We were more than a bit surprised when this underrated, business-like amp slipped from its cardboard carton. No fluorescent floral Tolex? No trans-dimensional quantum drive? Not even a monkey grip? Steve Vai designed this, didn’t […]