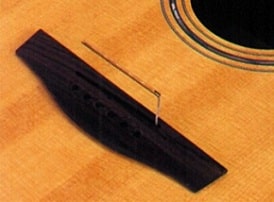 Piezo Electric pickups employ a crystal that has the unusual ability to transform mechanical energy into electrical voltage.

During the Sixties, pickup manufactures realized that if a small piezo-electric crystal could be attached to the soundboard of a guitar, the vibrations from the guitar would produce pressure upon the crystal and create a series of corresponding electric pulses. Add a couple of wires and an amplifier, they figured, and—in theory, at least—you should hear something pretty close to the instrument’s true tone.

The first piezo pickup format was the contact transducer, a small encapsulated device that could be temporarily attached to the soundboard. The most successful original version was produced by DeArmond, but in the late Sixties Barcus-Berry introduced an improved design that fit inside the guitar, under the bridge.

These soundboard transducers are still made today by a number of companies and offer a simple, no-modification solution to amplifying acoustics. However, they replicate only the vibrations of the soundboard, not of the strings.

In 1968, Baldwin produced the first under-the-saddle transducer, which could reproduce the vibrations of both the guitar’s top and its strings. The pickup—essentially a thin strip of piezos that could be sandwiched under the guitar’s saddle—suffered from uneven string-to-string balance, and it was exclusive to Baldwin’s guitars. But its potential didn’t go unnoticed by modern acoustic guitar pioneers Ovation.

When their star endorsee, Glen Campbell, became tempted by the Baldwin system, Ovation’s R&D team worked overtime to produce a better unit. The result was an under-the-saddle pickup with pure tone and exceptional balance. It proved so popular that Ovation became synonymous with the term electric-acoustic.

Today, many guitar manufacturers offer their own piezo-equipped acoustic or solidbody guitars, and many retro-fit pickups are available as well. If there’s a downside to piezo it’s that they add nasal overtones to the amplified signal. Thankfully, modern acoustic preamps feature equalization filters specifically designed to dial out these harsh textures.

First there were magnetic pickups, hex pickups for guitar synth, and piezos for that acoustic guitar sound. Now there’s LightWave Pickup System from Audio Optics, Inc. The LightWave is a departure from conventional magnetic pickup […]