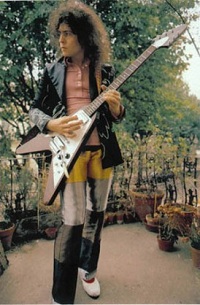 On September 16, 1977, just after five in the morning, an Austin Mini carrying English rocker Mark Bolan and driven by Bolan’s girlfriend, Gloria Jones, swerved off a road in Barnes Common, England, and crashed into a tree. The 29-year-old Bolan, who had never learned to drive, was hurled from the passenger seat into the back of the car and killed instantly.

While he began his career as a trippy-hippy in an acoustic and bongo duo, Bolan is best remembered for his work fronting T.Rex, the electric-pop-boogie band that is often credited with giving birth to the British glam rock movement of the early Seventies.

On the strength of two classic albums,1971’s Electric Warrior and 1972’s The Slider, as well as a flurry of strong singles, among them “Bang a Gong (Get It On),” T.Rex enjoyed enormous success in England in the first two years of the leisure-suit decade, topping the charts repeatedly and inspiring millions of young teenyboppers to fits of frenzy unseen since the rise of the Beatles. Unfortunately, T.Rex, despite numerous attempts, were unable to repeat their success in the United States, and their popularity in the UK waned rapidly as the public grew tired of the band’s essentially stagnant musical formula.

Ironically, at the time of his fatal accident, Bolan was enjoying something of a comeback. His final album, Dandy in the Underworld, charted respectably and was proof positive that his creative juices were once again beginning to flow. At the same time, the diminutive rocker’s cred was given a huge boost when the leaders of England’s punk revolution, who had come of age at the height of T.Rex mania, frequently cited T.Rex as one of their most important influences, embracing Bolan as the “Godfather of Punk.”

After Bolan’s death, his body was cremated. His memorial plaque, along with those of the Who’s Keith Moon, T.S. Elliot and Sigmund Freud, can be found at Golden’s Green Crematorium in London.