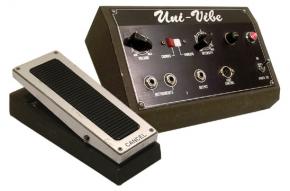 Multiple personality disorder may be a debilitating condition in humans, but it’s a delightful quirk in effects pedals. With small digital multi-effects pedal so prevalent these days, it’s always refreshing to check out a few analog stomp boxes that feature some pleasantly psychotic twists.

To that end, we subjected three effects pedals to analysis: three distortion related units—inspired by the venerable Uni-Vibe—Jim Dunlop’s Uni-Vibe Stereo Chorus, Fulton’s Deja Vibe and Roger Mayer’s Voodoo Vibe. While no two pedals were exactly alike in function, each possesses a dual nature that, when fully exploited revealed unique opportunities for extreme sonic manipulation. Any guitarist bored by conventional sounds will find plenty to get excited about in these boxes.

All three pedals were tested with fresh 9-volt alkaline batteries, and their signals were sent to a variety of amps including a Marshall JCM800, a Fender Pro and a cute little solid state Fender Bronco. We also fed Uni-Vibe—inspired units into a multi-channel mixer to better examine their stereo output.

Back in the day, organists who couldn’t afford a bureau-sized Leslie speaker cabinet would beef up the tone of their Farfisa and Vox combo organs with a little unit called the Uni-Vibe. Manufactured by the Univox Company, the Uni-Vibe did a fair job of replicating the Doppler effect of a Leslie cabinet’s rotating horn. And unlike a Leslie, it weighed far less than a small refrigerator. It was Hendrix, again, who dug the Uni-Vibe as a guitar effect, claiming it for future six-stringers like Eric Johnson and Stevie Ray Vaughan.

The Jim Dunlop Company, which owns the Uni-Vibe name, has been manufacturing several famous variations on the pedal for years. The Uni-Vibe Stereo Chorus can be thought as “one Uni-Vibe to go, hold the bells and whistles.” Unlike the Univox original, which consists of an AC-powered, book-sized enclosure connected to a speed-varying pedal, the Dunlop unit is of classic stomp-box proportions and runs on either a 9-volt batter or an adapter. Dunlop has also modified the circuit to vary continuously from “vibrato” to “chorus” (the original was an either-or proposition), and they’ve thrown in some clever stereo circuitry to boot.

The resulting sound is a solid simulation of the original. The chorus is whirly and whooshy, with plenty of air and phasing, while the vibrato imparts a mild pitch shift that undulates evenly throughout the entire range. There are no rude hiccups at the fast speeds, and the slow settings won’t give you that “who put the Quaaludes in my beer?” feeling. In addition to speed and intensity controls, the Uni-Vibe features a pilot light that faintly pulses in time to the speed settings.

The real fun comes when you work the mix control in association with the stereo output jacks. The mix ranges from “wide” to “mono,” and the outputs are labeled “left/chorus” and “right/vibrato”. With the mix set wide, the left output is dry and the right output is full, pitch-warbling vibrato. Pan the mix to mono and the left output comes alive with chorus, while the right channel’s vibrato gradually morphs into matching chorus. These various permutations give you the opportunity to use the Uni-Vibe with either the right output alone, varying the mix between vibrato and chorus, or with both outputs for a stereo spread that can range from vibrato-plus-dry to vibrato-plus-chorus (which sounded lovely in headphones) to dual-mono chorus.

With the Uni-Vibe in bypass mode, I was able to detect some signal coloration, a not unpleasant high-end sheen most evident in the pick attack. This minor complaint aside, the Uni-Vibe will please guitarists who want to add rotating speaker tone to their arsenal without breaking their back or spending an arm and a leg.

If you are even remotely aware of Mike Fuller’s Fulltone pedals, you won’t be surprised to know that he’s nailed the vibe of the original Uni-Vibe. Fullton currently offers the Deja 1 (mono or stereo), which comes with a large knob for controlling the rate of speed, and the Deja 2 (mono or stereo), which features the more traditional pedal speed control. Although we set out to test a mono Deja Vibe 2, we were lucky enough to score a stereo Deja Vibe 1 in time to check out its dual-output capabilities. The controls on both units are simple and almost identical to the original Univox model: chorus/vibrato selector switch, intensity knob, on-off footswitch, speed pedal or knob and—perhaps the only concession to modern values—a “modern/dark” switch.

Fullton pedals are known for both their stunning sound and rugged construction, and the Deja Vibe is no exception. The chorus and vibrato settings are warm and full, and the speed pedal gives you the ability to mimic the slow-to-fast rotary sound of a Leslie cabinet. Unlike the original pedal, the Deja Vibe has full bypass, so there’s no need to stick this in an effects loop to isolate it. About that modern/dark switch: the original Uni-Vibe was designed for the slightly higher and brighter outputs of compact organs, and the sound is somewhat dark when driven by a guitar. Flick the Deja Vibe from to dark to modern and you’ll get a nice little boost along with a less “loaded-down” tone. Furthermore, the stereo models feature true stereo output, creating a back-and-forth undulation in the sound field that none of the other Vibe pedals possessed.

The vibrato setting was especially nice with a slightly overdriven amp. Normally this is a recipe for disaster, since modulated pitch-shifting devices can get pretty ugly when distorted, but the Deja Vibe sounded like it was made for this purpose, achieving the wicked grind of Eric Clapton’s solo on “While My Guitar Gently Weeps.” That vibrato, by the way, has the loveliest bottom-end “thump.” I understand that connoisseurs of the original Uni-Vibe listen for just that thump when evaluating other units.

Roger Mayer didn’t invent the Uni-Vibe, but you can bet he spent plenty of time nipping and tucking at the guts of the models Hendrix owned. After Uni-Vibe production ceased, Mayer produced his Supervibe, used by both Stevie Ray Vaughan and Robin Trower. The Voodoo Vibe is the latest generation of this evolutionary chain, offering an immense amount of flexibility while remaining true to the Uni-Vibe tone.

The Voodoo Vibe is housed in a book-sized, cast-metal box with seven black pointer knobs. The function knob offers a choice of chorus, vibrato and (surprise!) tremolo. The speed of each effect can be set with the range knob, which chooses either a sine or triangle wave in slow medium or fast mode, and tuned in precisely with the fine knob. The intensity and output knobs vary the depth of the chosen effect and the final output of the signal, respectively, and the symmetry and bias controls actually shape the wave you’ve chosen, creating giddy roller-coaster sensations in the shower vibrato settings and helicopter-like “woof” sounds at faster speeds.

For those who desire the pedal option of the original Uni-Vibe, the Voodoo Vibes lets you control its speed by plugging any standard volume pedal into a couple of jacks on the back. The dual-output jacks are low impedance and deliberately active (though totally uncolored) for parallel processing and driving longer cable lengths. The power source can be either a 9-volt battery or an adaptor, and the Voodoo Vibe has a status LED.

The sound of the Voodoo is simply stunning. It was possible to teak it just so and imitate the original Uni-Vibe sound, but this unit is inspired by the Uni-Vibe, not just a clone or an upgrade of it. The vibrato effects call forth the aforementioned roller-coaster and helicopter sensations, as well as bubbly underwater effects, with ease. The chorus is so lush and full, it simply bears no comparison to the average pedal. And if you’ve been hoping to come across a vintage amp with a working tremolo circuit, save your time: the Voodoo Vibe can cop the shimmer of those old Fender, Vox and Ampeg tremolos, and go into some pretty extreme volume-chopping effects as well.

End Line – If the original Uni-Vibe sound is your Holy Grail, the Deja Vibe is your pedal. For a deep sound-shaping tool, check out Voodoo Vibe, a multifunctional monster that will put half a dozen little colored boxes out to pasture.

On January 12, 2011, the Jackson Browne Signature Gibson acoustic guitar was unveiled at the National Association of Music Merchants (NAMM) winter show in Anaheim, California. Hearkening back to Gibson’s revered Roy Smeck models of […]

The name Gretsch conjures up images of big-bodied guitars, with cool names like White Falcon, Black Phoenix and Country Gentleman being put through their paces by legends like Beatle George Harrison, 50s rock ‘n roller […]