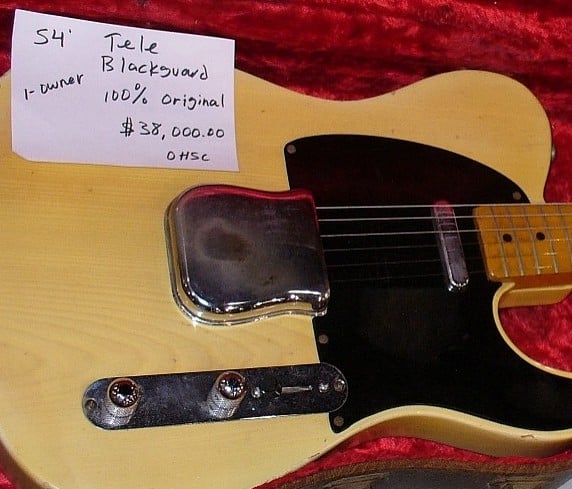 Just over a week ago I had the chance to visit the Orlando International Guitar & Music Expo 2012. That’s fancy-talk for ‘guitar show’.  If you’re not familiar with what a guitar show is then try thinking of it this way – we all get the concept of a convention or conference for business professionals – a big room with various vendor booths showing off the latest products (expo hall) and there are usually some speakers/presenters teaching or otherwise discussing the latest industry news, etc.  Well, other than NAMM, guitar shows are the closest thing to a business convention that we players, collectors, and all-around guitar lovers have for our favorite subject!

While some of the largest guitar shows may offer special ‘clinics’ (training sessions are often sponsored by a manufacturer hoping to show you why you need to buy their latest products), not all guitar shows will offer much in the way of training.  However, what they ALL do have in common is their version of the ‘vendor expo hall’ where guitar dealers bring lots of cool (and often vintage) guitars, amps, effects and more hoping to sell/trade them to/with show attendees. In other words, it’s a lot like a big flea market for guitar and music gear!  And for the guitar lover it sure beats just about any other kind of shopping experience since you have so many cool old guitars under one roof.  I’ll take a guitar show over going to the mall with my wife any day! 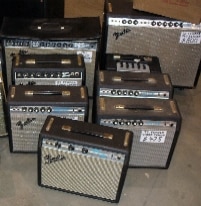 This year’s Orlando guitar show was held (as always) in Kissimmee, an Orlando suburb about 10 miles from Mickey’s theme park. Dealer setup day was Friday afternoon, January 20th.  And the show was then open to the public for the weekend of January 21-22.  This was my fourth show visit out of the last six years.   And an added bonus to this year’s show was the fact the facility was also getting ready for a large antique car and hot rod auction schedule for the following week.  So the parking lot offered lots of extra eye-candy for the classic car lover!

The show featured a nice mix of vintage electrics and acoustics, a few rare items, and several new guitars as well.  Depending on who you talked to, prices were either up or about the same as last year.  Since the show, I’ve seen comments on several guitar forums that range from”‘(things) were over-priced” to “I got a deal on a __ amp” (or guitar, bass, etc.).

I’ll let you judge for yourself what you think of the prices based on the following samples from the show:

I started my day heading out with a little cash in my pocket and three effect pedals I hoped to sell or trade. I always try to bring both cash and trade items since you never know what you may find and sometimes you can work a better deal trading vs. simply purchasing outright. Of course, in most cases ‘Cash is King’ and not all dealers take credit cards. And if you are worried about walking around with a roll of Franklins in your pocket, they do have onsite security and there were at least two police officers present at this show. You may also just bring your ATM card and only take out the cash if and when you need it.

If you bring gear to sell or trade you should be prepared to have your case or bag inspected before you enter the showroom floor. Security will generally tag larger items so that they are easy to identify upon exit.

Walking around with a bag in hand can be a great conversation starter. “What’s in the bag?” can lead to discussions about your interests. And these conversations sometimes will result in a dealer pulling something out from under the table for your review. Being a vintage Gibson lover, I always get excited if that something is in an old tan case with pink interior!

At the show I saw a few guys pushing around carts full of amps, worn guitar cases and other items they hoped to trade or sell. There were many guitars in gig bags slung across the backs of show patrons. And a few went bare bones with their guitar simply hanging from their neck by its strap. I don’t personally recommend this method since the aisles can get crowded at times and I wouldn’t want to see any neck breaks (people or guitars)!

If you participate in any online guitar forums then these shows can be a great place to meet fellow forum members. I always like to put a face with a person’s screen name and so I wore my LPF t-shirt, which helped to identify me to a few fellow forum members I passed along the way.

Admission to these shows is usually around $10 and snacks like hot dogs, pizza and soda are available for about the same prices you would expect to pay if going to a ball game or similar event.

It is always fun to see things that I normally wouldn’t find in my local music store.  And this year’s show did offer a few such items – The biggest probably being a real 1959 Les Paul ‘burst’ in person.  And while this particular guitar wasn’t exactly a complete ‘Holy Grail’ Les Paul, due to having had a factory re-neck in the early 60s, it was cool to see up and personal.

And here are a few other cool items that stood out to me during the show:

Another cool thing about a guitar show is you never know who you may meet at one. A few years back I ran into Rick Derringer at the Warrior Guitars booth at the Orlando show.

The two largest guitar shows in the country are in Dallas (held each spring) and Philadelphia (held every fall).  I’ve never been to either of these but have been told that they all basically operate the same as the Orlando show.  Of course, you are more likely to find some special speakers and performances at the larger shows.  For example, a couple of years back they featured the Les Paul previously owned by Peter Green and Gary Moore at the Texas show and I’ve heard that Tom Murphy (Mr. Les Paul aging, himself) has spoken at these types of events in the past. 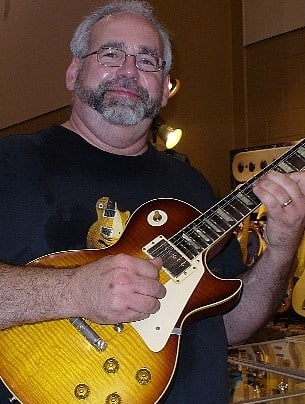 But what if you don’t have plans to be in Florida, Texas or Pennsylvania any time soon?

There are actually many regional guitar shows held each year all around the country.  In addition to the three shows mentioned above there are shows in Texas, Nashville, Chicago, Northern and Southern California, and Philadelphia, North Carolina and South Carolina just to name a few.  You may want to check out Dr. Duck’s show calendar for a list of shows near you!

My afternoon at Saturday’s show ended with no sales, no purchases, and no trades. However, I came away having fully enjoyed myself while checking out all the cool items on display. I took a lot of cool pics and I also had the chance to meet a few of my forum buddies. And it certainly beat staying home and mowing the grass – yes, we still have to do that in January here in Florida!

Now it is your turn to go out there, find a show, and let the fun begin!  I will warn you that these shows can become addictive, but since we guitar lovers already are used to dealing with G.A.S., that shouldn’t come as a surprise to anyone.  Oh, and if you don’t know what G.A.S. is then you’ll just have to check back in a future article to find out (LOL).  In the meantime, Enjoy The Show…

Fitting into the Mix The easiest way to get a great acoustic sound is to start with a great-sounding guitar. Taylor acoustics have long been favored by artists and recording engineers for their clear, balanced […]