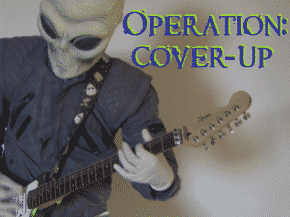 Remember those old science fiction films where the government engages in massive cover-ups, like Hangar 18, for example.

–Or like the movie “Men In Black” when the secret government sends in two slick dressed men in black, and the notable gadget called the ‘Memory Eraser’ that the agents used to erase anyone’s recent memory who witnessed any alien interaction.

Gibson’s Hendrix Strat is nearly the same, but it’s not fiction, it’s fact. Apparently the guitar company felt the heat from the people which resulted to, perhaps, a massive cover-up. As quick as you can say “GONE“, the guitar and any of it’s evidence has vanished into thin air.

When we tried to contact Gibson about the Hendrix Strat, I felt as if I was talking to a CIA agent. Deceptively, Gibson isn’t telling anything. Their don’t ask–don’t tell policy feels like that a corrupt politician would use. I wonder how many journalists have called Gibson to inquire about the current status of Hendrix Strat? My guess is a lot. Why are they not open and honest about it?

We here at Gear-Vault did not stop there, we continued to be persistent and even attempted to contacted them several times on Twitter, after all, Gibson was proud to announce the all-new Gibson Hendrix Strat some 3-weeks ago on Twitter–Gibson even posted images of the Hendrix Strat being constructed in the overseas Gibson factory–the images were quickly deleted off Gibson’s website, along with hundreds of peoples’ outraged comments.

It’s becoming clear that Gibson has abandoned the Gibson Hendrix Strat in which they collaborated with Authentic Hendrix LLC. Was there threats of a lawsuit from Fender Guitars? Did Gibson feel the pressure from the public, or did Gibson decide that there was no integrity in making a fake Strat copy, while claiming this is the guitar Hendrix would play if he were alive today? I guess we’ll never know.
This ship has sunk–or has it?

How To Spot Fake Fender Guitars

It’s easy to get bamboozled if you’re purchasing a vintage Fender guitar. Because these instruments are bolted together, their parts can be swapped, stripped or replaced faster than you can say “rip-off.” A buddy of […]

Valley Arts Guitars Brent Mason Signature Custom Pro – Brent Mason collaborated with Valley Arts on this amazing-sounding guitar, which is based on the 1968 Fender Telecaster that Mason has used for years. The Brent […]