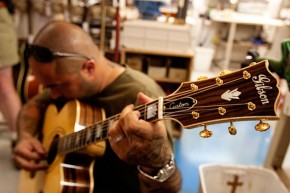 Gibson, a company that has taken its share of pipe in the media and in the blogosphere for some of its recent marketing decisions, seems to have done it again with the release of the new Aaron Lewis Signature Southern Jumbo Acoustic Guitar at the NAMM show.

Aaron Lewis is the front man of Staind, one of the most popular rock acts of the last decade, with five #1 singles and 13 million album sales to the bands’ credit. The guitar in question is a replica of Lewis’ vintage 1951 Southern Jumbo, which is one of Lewis’ most treasured instruments and an important part of his musical process.

Gibson will produce 413 of these guitars at three different price points, which is where this plot sickens. The first 13 guitars will be hand-aged in the Gibson Montana Art Shop to resemble Lewis’ guitar in every way and will be actually played by the man, himself, as well as autographed. The price? $17,198. The next 37 will be numbered and aged and will retail for a paltry $8.598.00. The rest, #51-413, will come with a signed certificate of authenticity and will retail for $3,653.00.

Inhabitants of many guitar forums are already up in arms over this new guitar, and see Lewis as a disposable icon that doesn’t rate such an expensive signature model, especially since Lewis’ autograph, which makes up a large part of the SJ’s price, seems to sell on eBay for around 30 bucks.

In the wake of the Hendrix guitar controversy and the Dusk Tiger flap, this guitar really seems to be a questionable move on Gibson’s part. Many in our community truly wonder just what Gibson is thinking and can’t understand why the company can’t just make the guitars we all want rather than continuing to try to be some kind of high-end lifestyle brand. Plus, this seems to one more sign that the whole relic/signature model thing has just gotten out of hand.

There are only two times a beat-up guitar is cool: if it sells for $400.00 or less (a cool toy) or if you, the player, actually beat it up on stage (a real working instrument). Other than that, this sort of thing falls into the “poser” category, especially for 17 grand. I’m sure someone somewhere will think this thing is cool, which makes me shudder to think what other guitars that person might have over-paid for, but, to most of us, it is just another sign of a company out of touch with its customers and of the continuing madness of King Henry.
Photos are courtesy of KBD Photography

Epiphone’s determination to build high-quality, high-standard guitars with a reasonable price tag began many decades before our current economic situation, making the company a long-trusted foundation of “great bang for the buck” instruments. Epiphone’s GT […]