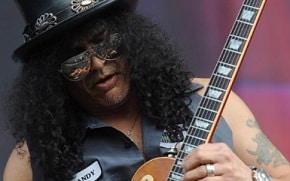 Happy 4th of July, everyone! In honor of today’s independence day, I think it’s fitting to share some videos of, what I would consider, some of the greatest guitar players to ever perform “The Star Spangled Banner“.

Included in this column is Steve Vai’s particularly shred-awesome version of the song, Zakk Wylde‘s gritty version, and Eric Johnson’s fluid version — we can’t forget the versions by Dave Mustaine and Slash. Those are some great shredders, but lets not forget some of the classics such as Stevie Ray Vaughan (using a slide!) — and of course, there’s the master of them all, Jimi Hendrix at Woodstock.

So I figured adding more solo-versions to this column, the better! I could’ve kept on going, but I think ten versions of the same song pretty much gets the point across, and this represents a great mix of versions and styles from shred, metal, bass and blues.

Metallica and Megadeth are both thrash metal pioneers who helped usher in the modern era of heavy metal and both bands have enjoyed great success and popularity amongst rock music fans the world over. The […]

Did the title get your attention? Good. According to an interview conducted with Jimi’s younger sister, Janie Hendrix, Gibson is going to create the new Jimi Hendrix Signature Model. Update: Confirmed. Gibson did knock off […]