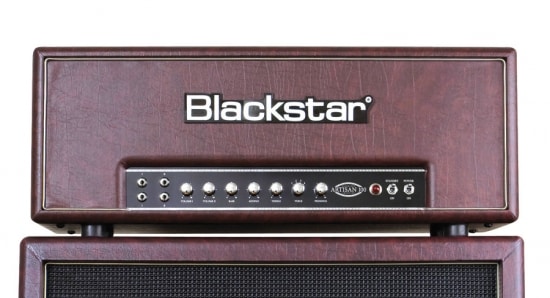 Are you looking for an affordable alternative to those expensive vintage amps that doesn’t fall short in the tone category? Generally, amps that mimic such classics as Marshall’s Plexi are hand-built boutique amps that use expensive components, and pass the cost on to the end user. While they may sound great, wouldn’t it be nice to find an amp that has classic tonality that is a bit more budget-friendly?

Well, a group of amplifier designers (including British masters Bruce Keir and Ian Robinson) have joined together to introduce Blackstar Amplification, whose goal is to build affordable yet versatile hand-wired amps. In that spirit, the Blackstar Artisan 100 is an all-tube Korean built variation on the classic Plexi design with a few extras tossed in.

Most notable among the Artisan 100’s features is its four position voicing control. This knob will allow you to access four different voicings per channel (Bassman, Twin, early Plexi, later Plexi respectively), which tweaks the pre- and power amp gains, EQ, and speaker damping.

The Artisan 100 is a dual channel amp with a four input configuration (one high and one low gain for each channel), which will allow you to hot-rod the channels together to expand your tone even further. One drawback of this configuration is that the amp is not footswitchable, so in order to switch channels mid-song, you will need to run an A/B/Y switch from your guitar into both channels in order to gain channel changing ability.

Advertisement—————————————
—————————————————————
Although channel changing can be a pain, the Blackstar Artisan 100 half stack will give you amazing dynamics and response. It is a very solidly built amp that should give you a long life of playing gigs. Also, this all-tube amp derives its power from four EL34s through a custom output transformer, and the cabinets are loaded with Celestion Vintage 30s. The Artisan 100 provides enough power and clarity to sear the eardrums of your audience while still being able to articulate every single note, even when played through the higher gain settings.

With its balance of versatility, sturdiness, and affordability, the Blackstar Artisan 100 half stack combines vintage amp tone at a fraction of the price. Go check one out today!

Kustom got metal? Remember back in the day when you might recall those kind-of-weird yet kind-of-cool colorful car seat-like padded tuck-and-roll jobs? You know, the colorful /sparkly padded amps Creedence Clearwater Revival were known to […]

Fender continues its successful push into the arena of affordable modeling amps spearheaded by the G-DEC series. Now, with the Mustang I and II, Fender brings modeling technology to its more budget-conscious level yet. Mustang […]

There are many amazing tube driven amplifiers on the market. There is also a dizzying array of solid-state modeling amps to choose from. Up until now, there has never been an option for players who […]