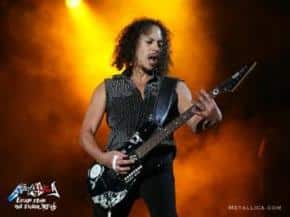 When Kirk Hammett, the lead guitarist of Metallica, was asked about his gear and tone for their new Death Magnetic album, this is what he had to say.

“I’ve added more midrange to my over sound. I can still appreciate my original scooped sound, but I need to feel the ground shake when I hit a chord. It hasn’t been any radical change in gear as much as it’s been a change in EQ. For Death Magnetic I used what I always use, which is my standard touring rack, which is filled with some [Mesa] Boogie stuff and a Marshall that I’ve had forever. I also used the new Randall amp that I helped design and Greg Fidelman, our engineer, turned James [Hetfield] and me onto Ampeg heads. Ampegs made incredible guitar heads in the early Nineties and then stopped. And I don’t know why. The one we used had a nice clean, warm sound, and it blended well with the other amps that were in the studio.

I’m a total vintage freak and would have liked to use more of my collectible amps, but we got the sound that worked for the sonic context, and I really didn’t want to make it more complicated. The same goes for guitars. I used a few vintage guitars here and there. I think I used a ’58 Paul and a ’59 Tele on some clean stuff, but overall, almost everything is done with my ESP Mummy and Caution guitar, which is the original “Skully” [KH-2 Kirk Hammett signature] guitar—the very first ESP guitar, from 1987.”

And that’s what Hammett has to say about that!

So, now let us ask the Gear-Vault readers. Do you like Metallica’s Death Magnetic Guitar Tone?

The Mesa/Boogie M9 Carbine Bass amp is essentially an updated version of the M6 Carbine, a bass amplifier that bass players worldwide hold dear for its all-tube Trans-Class preamp and MOSFET power section which gives […]